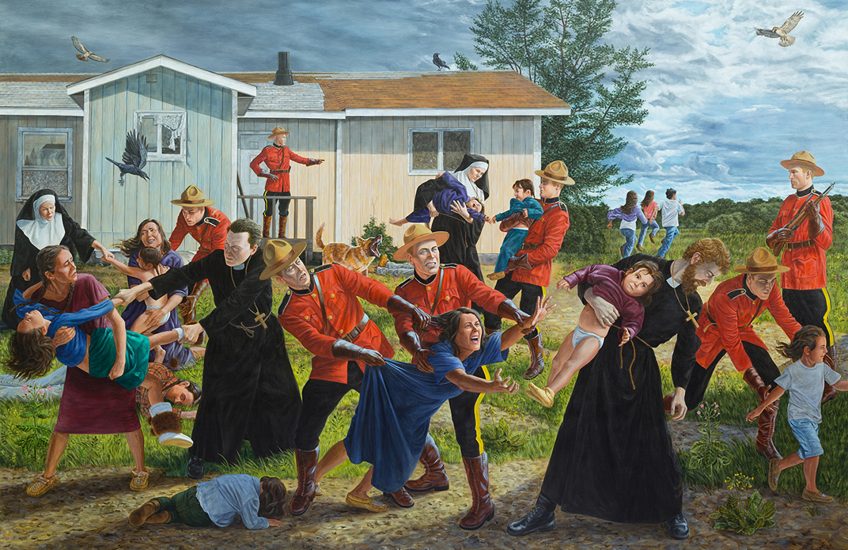 A new exhibition at the Agnes Etherington Art Centre at Queen’s University is exploring some of the darkest chapters of Canadian history from an Indigenous viewpoint.

Kent Monkman is the artist and curator behind the collection called Shame and Prejudice: A Story of Resilience.

Monkman is of Cree descent and created the exhibition in response to Canada’s sesquicentennial celebrations. His paintings tackle everything from colonialism and Confederation to residential schools and the housing crisis on reserves.

“Its basic aim is to tell some of the stories that haven’t been told from an Indigenous perspective,” said Sunny Kerr, a curator of contemporary art at the Agnes. “He is narrating all of the chapters through the voice of his trickster alter ego Miss Chief Eagle Testickle who appears in many of the works kind of messing around with history and inserting an Indigenous perspective where it hasn’t been.”

The alter ego travels back in time and acts as a guide on a journey through Canada’s past. The story begins with contemporary life on a reserve in Winnipeg. Miss Chief then heads back in time to the period of New France and the fur trade and narrates a story of Canada through the eyes of First Nation’s resilience.

“It’s very timely, these artworks and installation speak to truth and reconciliation,” said Alicia Boutilier, the chief curator at the gallery. “Kent Monkman’s grandmother was also one who attended residential schools. So he’s drawing on, not only on his own family’s history but also a history that was hidden and is bringing that out in his artworks.”

The exhibition also features historical artifacts from museums from across Canada but displayed in alternative ways.

Monkman will be in Kingston on Jan. 20. He’ll be leading a tour of the exhibition at the Agnes in the afternoon and in the evening, he’ll be part of a talk at Ellis Hall at Queen’s where he will discuss his artistic practice and the development of the exhibition.

Shame and Prejudice: A Story of Resilience runs until April 8.