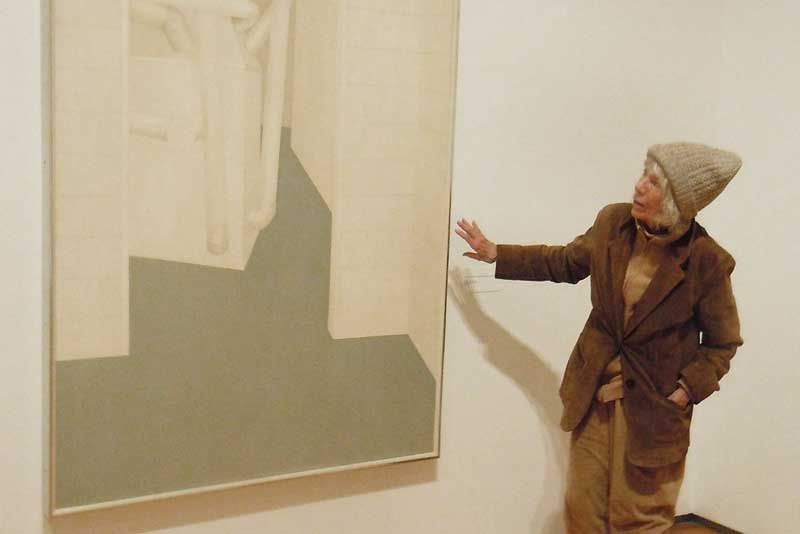 Kim Ondaatje, long time resident and keeper of Blueroof Farm in Bellrock, likely hasn’t put paint to canvas in decades, or a least not in the big way she did decades ago. However, a recent trip with her to the Agnes Etherington Art Centre at Queens University, where a retrospective of her paintings hangs until April 5, brought perspective and insight to the career of a formidable Canadian artist whose works hang in galleries and collections all over the world.

The show is a smaller, more compact version of a larger retrospective that was held last year at Museum London in London, Ontario. The Kingston show focuses on the artist’s paintings from three distinct periods.

The first period, her Hill series (1965-1966) focuses on the wilderness of northern Ontario, which Kim was inspired to explore by her industrialist father, who also loved the wild north. These smaller paintings depict locations in Bancroft, Muskoka and Haliburton, places she explored and came to know well as a young adult. Painted with a palette knife these works depict large, moody landforms, hills and shorelines that for Kim represent highly emotional times in her early adult life when she experienced both love and loss. “In these paintings I was letting out my feelings regarding the death of a friend who died in a white water canoeing accident in 1947.” The works represent the artist’s earlier expressionistic tendencies as a young painter but also foretell the compositional style typical of her later work.

The House on Piccadilly Street series (1967-1969) presents a more domestic time in Kim’s life, when she was busy setting up her first family home in London, Ontario. The home is the subject for this series, which she painted after the house was renovated, and prior to moving in. In this series she gave up oil paints in favour of acrylics to meticulously render these hauntingly uninhabited interiors, simply titled “Door”, “Furnace”, “Chair”, which show single rooms or sections of rooms, but all devoid of any sign of human life. Still, the paintings offer a certain still tranquility, each beautifully bare and geometrically pleasing in their precise emptiness.

For the artist these works bring back memories of her mother, who set up her family’s numerous homes as perfect domestic settings, places so careful and regal that Kim recalls being afraid of breaking things when she would visit them with her dogs and children. “This series of the Piccadilly House pictures are about the way western society emulates perfection and symmetry and lifelessness. As you see there are no signs of life in these paintings, which is very different from Blueroof, where I live now and which is overflowing with life.”

Both of these earlier series foreshadow the compositional qualities of Ondaatje’s Factory series (1970-1974), works that question the environmental impacts of big industry. These expansive works depicting some of Ontario’s largest factories, like Carlings on the 401 and the Lake Ontario Cement Factory in Prince Edward County are austerely beautiful in their masterful draftsmanship and subtle colouring, while simultaneously addressing their negative impacts on the environment. They depict the formal architectural landscapes of big industry typical in those decades, structures and related objects that are placed in what appear to be inaccessible landscapes, places that seem cut off from the living world yet which possess an austere beauty of their own.

These canvases definitely hold surprises for those who have never seen them in person. In “Carlings on 401” for example, a barely noticeable lumpy section of the canvas higher up depicts a small jet plane, soaring straight up perpendicular to the painting’s horizon line, a daring and inventive add on by the artist that is so subtle it fails to appear on the postcard-sized reproduction advertising the show; yet somehow it seems to foreshadow a dubious future. The show includes other noteworthy stand-alone works, including a painting of the artist as a young girl and also a short film made by the artist in conjunction with the Factory series that puts her huge behemoth factory spaces into the world of real time.

To view a collection of work by a mature artist, one who at age 86 has had decades to reflect on her past work, is a real treat and it was made more special in the company of Kim who never fails to impress with her generous reflections on the people, places and events that inspired her work, and that still fully engage her youthful heart and mind.

The Agnes Etherington Art Centre is located at 36 University Avenue in Kingston. Admission is free on Thursdays. For more information and hours call 613-533-2190.

Image:
Artist Kim Ondaatje reflects on “Furnace”, a painting from The House on Piccadilly Street series, one of many works included in a Retrospective of her work that is at the Agnes Etherington Art Centre in Kingston until April 5.