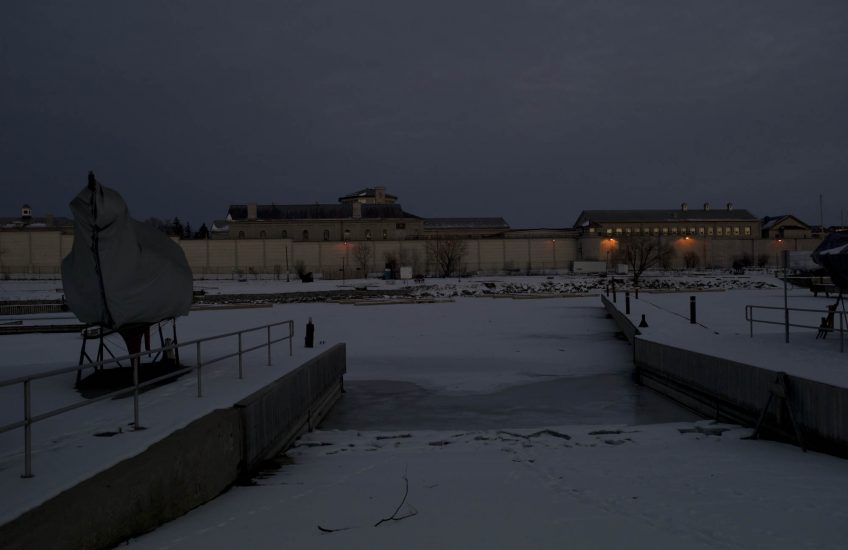 Opened in 1835, Kingston Penitentiary in Ontario is a model of old-school incarceration: the Doric columns at the gatehouse, the grand stone archways and staircases, the bell tower, the cells with barred doors that face inward into open wards.

“It is an architecture of powerful symbolism that we don’t build anymore,” says Canadian photographer Geoffrey James. “It’s supposed to be imposing and serious.”

In 1971, inmates rioted for four days, one of the most violent events in the prison’s history, over plans to relocate them. The new Millhaven Institution, in nearby Bath, was to gradually replace KP as the province’s principal maximum-security facility. “But Millhaven’s worse,” James says. “The ranges are like motel corridors. It’s a terrible place.” Last year, the remaining inmates were transferred without incident, though some didn’t want to leave.

When its gates shut for the final time in September 2013, Kingston Penitentiary was among North America’s oldest operating prisons. Notorious killers—Paul Bernardo, Clifford Olson, Russell Williams—slept in its cells and exercised in its yards, but James didn’t focus on the lives and personal effects of infamous inmates.

“My whole thing was predicated on privacy,” the former Time magazine reporter turned photographer explains. “Nobody was identified. The inmates all had to sign releases; it took months to get permissions. But I had to get that clear: This isn’t about any of the sensational stuff. It’s about prison life, an institutional historical record, and the physical space.

“An empty space invites you in. If you have people, you always have to deal with anecdote and incident.”

James talked with dozens of inmates—some were open to converse, others were hostile—but during his scores of visits he was most troubled by the relationship between prisoners and correctional officers. Thetraining course for a federal prison guard is typically around four months: “And it shows,” says James.

“Inmates are human beings with human aspirations. And most of them are going to be released. You reap what you sow. If you treat people like nothing, you’re going to get nothing back.”

This visual essay draws from the 100-plus images in James’s forthcoming book, Inside Kingston Penitentiary (1835–2013), due out in October.

An exhibition of photographs from Inside Kingston Penitentiary (1835–2013) is showing at Kingston’s Agnes Etherington Art Centre until December 7.