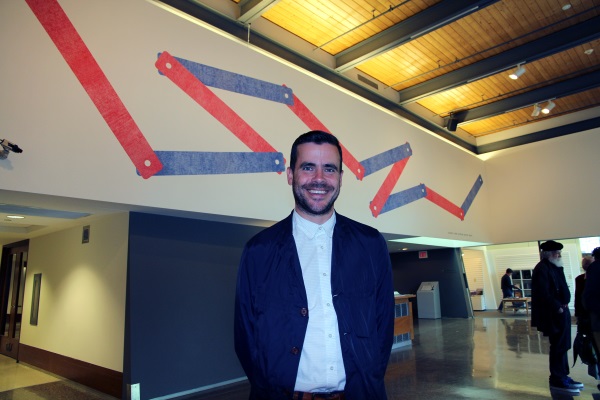 Over a million pencil strokes later, Derek Sullivan believes he has transformed the feel of the lobby at the Agnes Etherington Art Centre.

Unlike most murals, Problems That Arise from Continually Confusing Left & Right, formally unveiled Saturday, was created with pencil crayons rather than paint.

He says his earlier impression of the lobby was that with the multiple entrances leading to other areas of the centre and the numerous activities often going on, the lobby was a space that you “wanted to get out of to get somewhere else.”

That’s not the case anymore, he says.

“When I was thinking of the composition and the project I wanted something that was going to anchor an experience in this space,” Mr. Sullivan explains. “Once we peeled the mask off I think it just changed how this space just feels, not as echoey, not as large.”

The piece, a blue and red folding ruler that zigzags across the wall above the reception desk, brightens the space.

Unlike most murals, Mr. Sullivan used pencil crayons. Up close, the individual pencil strokes can clearly be seen.

“I didn’t want it perfectly even. You get this big gesture of the zigzagging line, and then immediately you are aware that there’s a complex, organic texture to the whole thing. So that was a nice surprise,” he says. “For me it’s opened up the possibility of making more works like this in the future.”

While Mr. Sullivan says he always uses pencil crayons when drawing on paper, this was the first time he used it on a painted wall. It was a step into the unknown.

One of the surprises, is that despite going over the piece twice, less than 20 pencil crayons of each colour were used when he had estimated at least 50 of each would be needed. The reason, he thinks, is that the rougher surface takes less material off the pencil crayons.