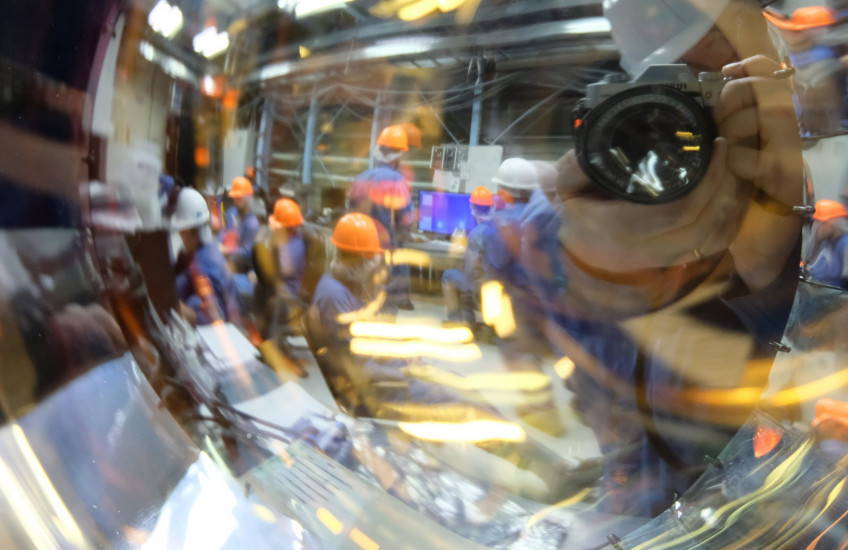 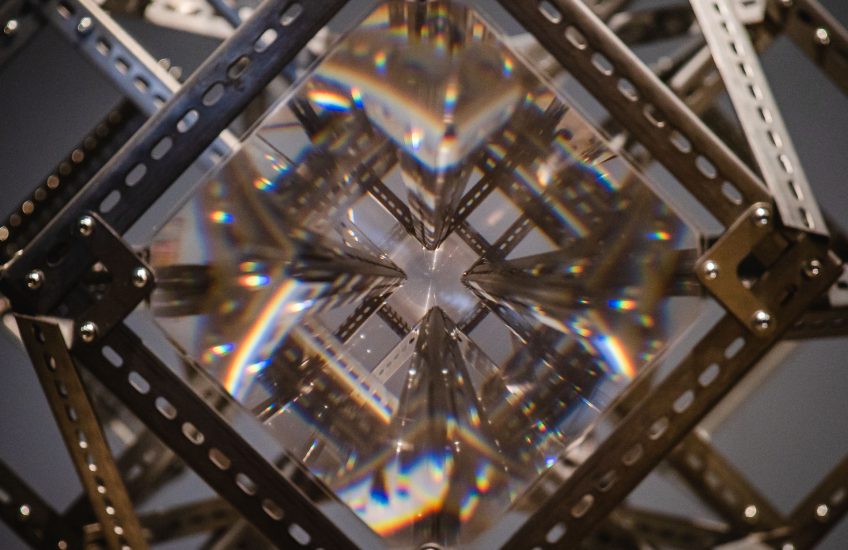 Astronomical observations have revealed that something we don’t fully understand is helping to shape the universe. Gravity holds planets in their orbits, and keeps stars within their galaxies—but measurements show there is more gravity holding galaxies together than what could be generated by all the matter we can see (stars, planets, dust, etc.). It is dark matter, invisible to human senses, that gives the universe the structures it has. Until we learn more about it, “dark matter” is the label we use for the cause of this extra gravity.

In science, the unexpected occurs when the result of an experiment is different than predicted by existing knowledge.

Think about how you know something—that the sun will rise tomorrow, for example—and how that knowledge sets your expectations.

To find the mysteries in science is to find those moments when assumptions about knowledge are shown to be wrong: this is the scientific process. Scientists must avoid their biases to be able to recognize the unexpected.

That dark matter exists is one of the most important and unexpected discoveries of the last century. The search for dark matter is the scientific endeavour to understand what this unknown matter really is.

A liquid nitrogen tank being used at SNOLAB. Video: Dan Thomson.
Play
Pause
How do we know dark matter is there?
Although we haven’t detected it directly, there are many types of evidence that, when put together, all point to dark matter’s existence.
Galaxy rotations
Galaxy rotations 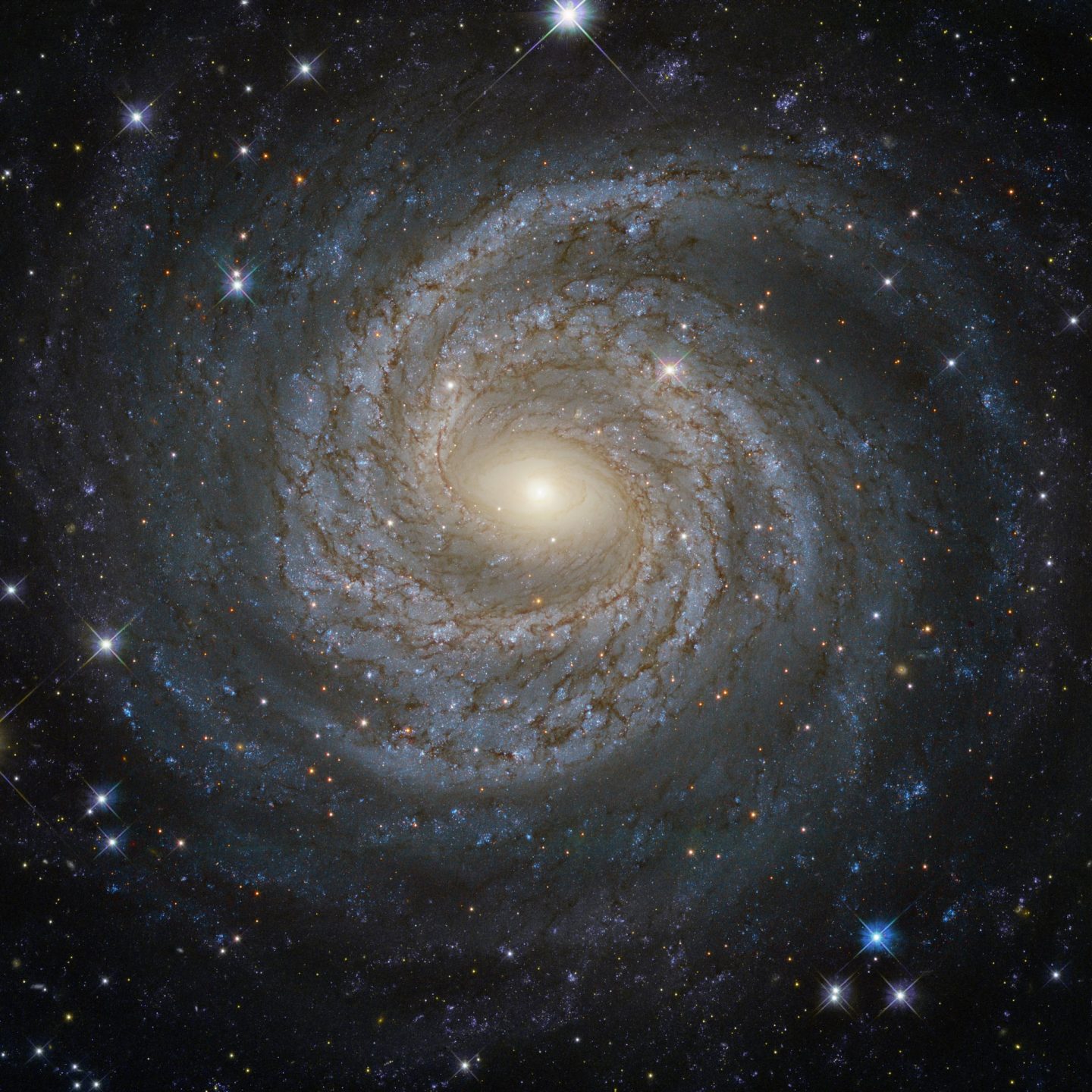 Image: ESA/Hubble & NASA. Acknowledgement: Judy Schmidt (Geckzilla).
Galaxies are made up of gas, dust, and stars, as seen here in the beautiful spiral galaxy NGC 6814. Like planets in our solar system, a star’s speed as it travels around the centre of its galaxy reveals the strength of gravity’s pull. Galaxies are not collapsing inward or flying apart, so the star’s speed must balance the pull of gravity, just as the International Space Station stays in steady orbit around Earth. Yet the speeds of these stars often tell us that there is much more gravity than can be accounted for by normal matter, and that this extra gravity is present out to at least the edge of the galaxy.
Image: ESA/Hubble & NASA. Acknowledgement: Judy Schmidt (Geckzilla).
Galaxy Clusters
Galaxy Clusters 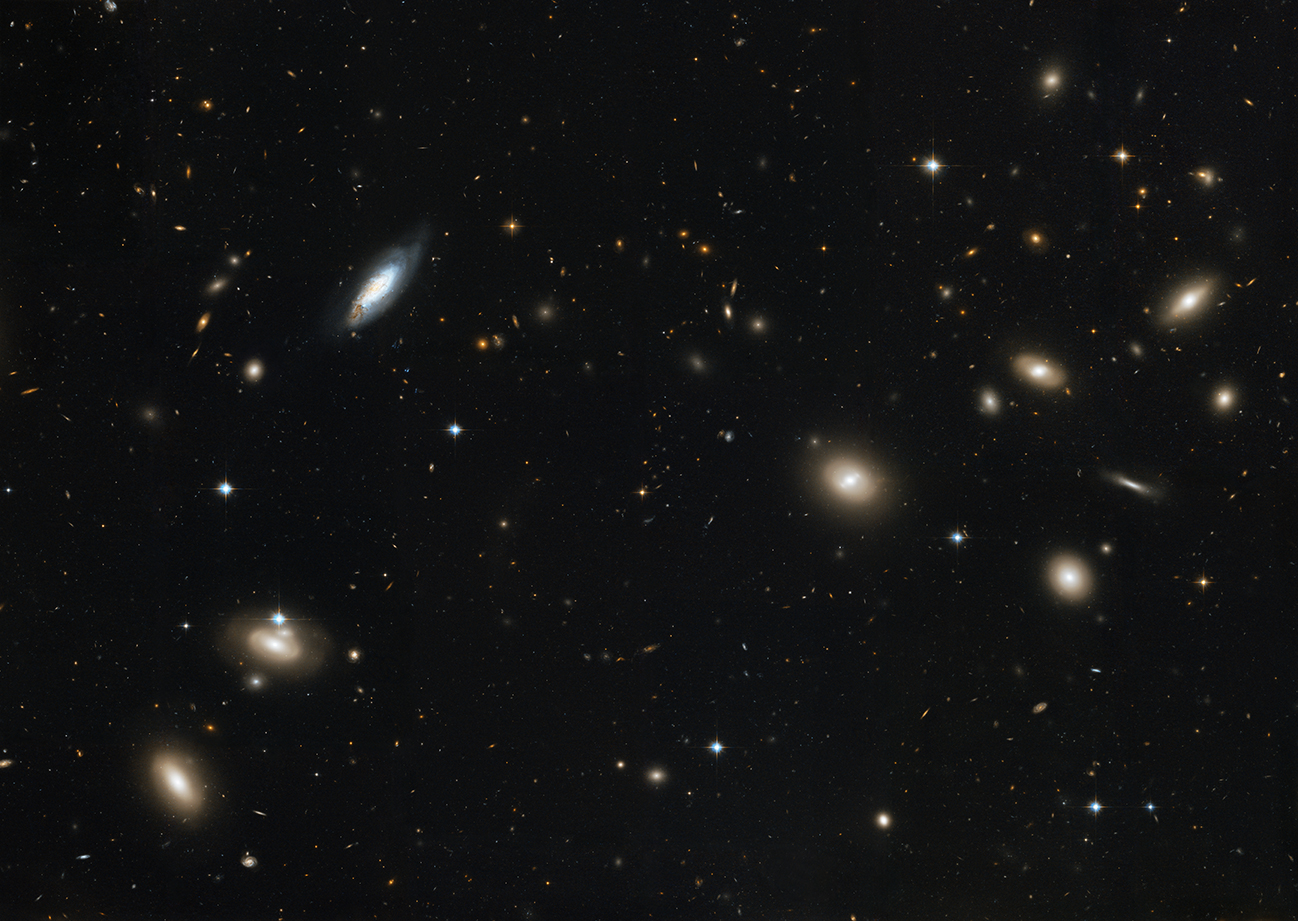 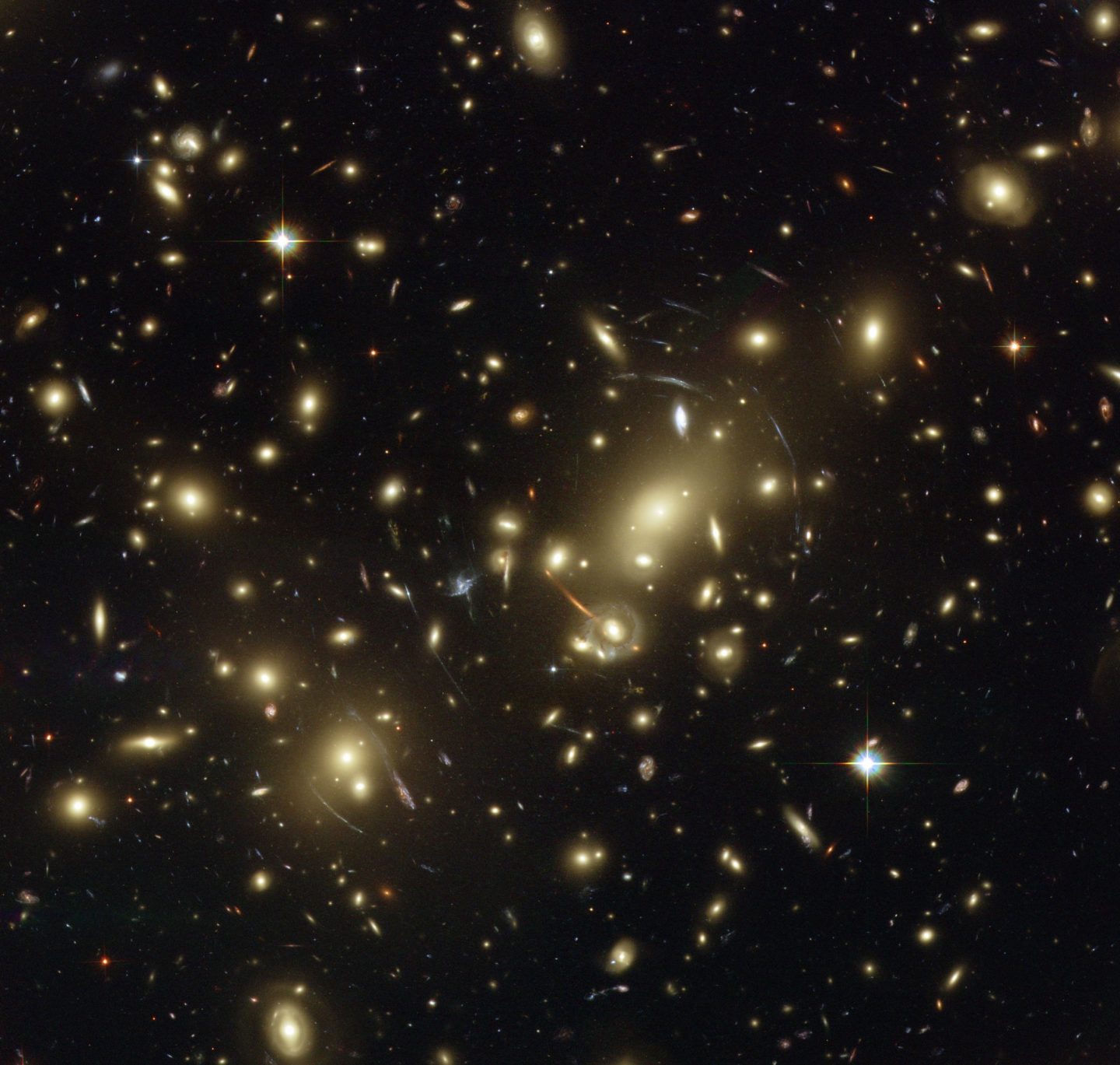 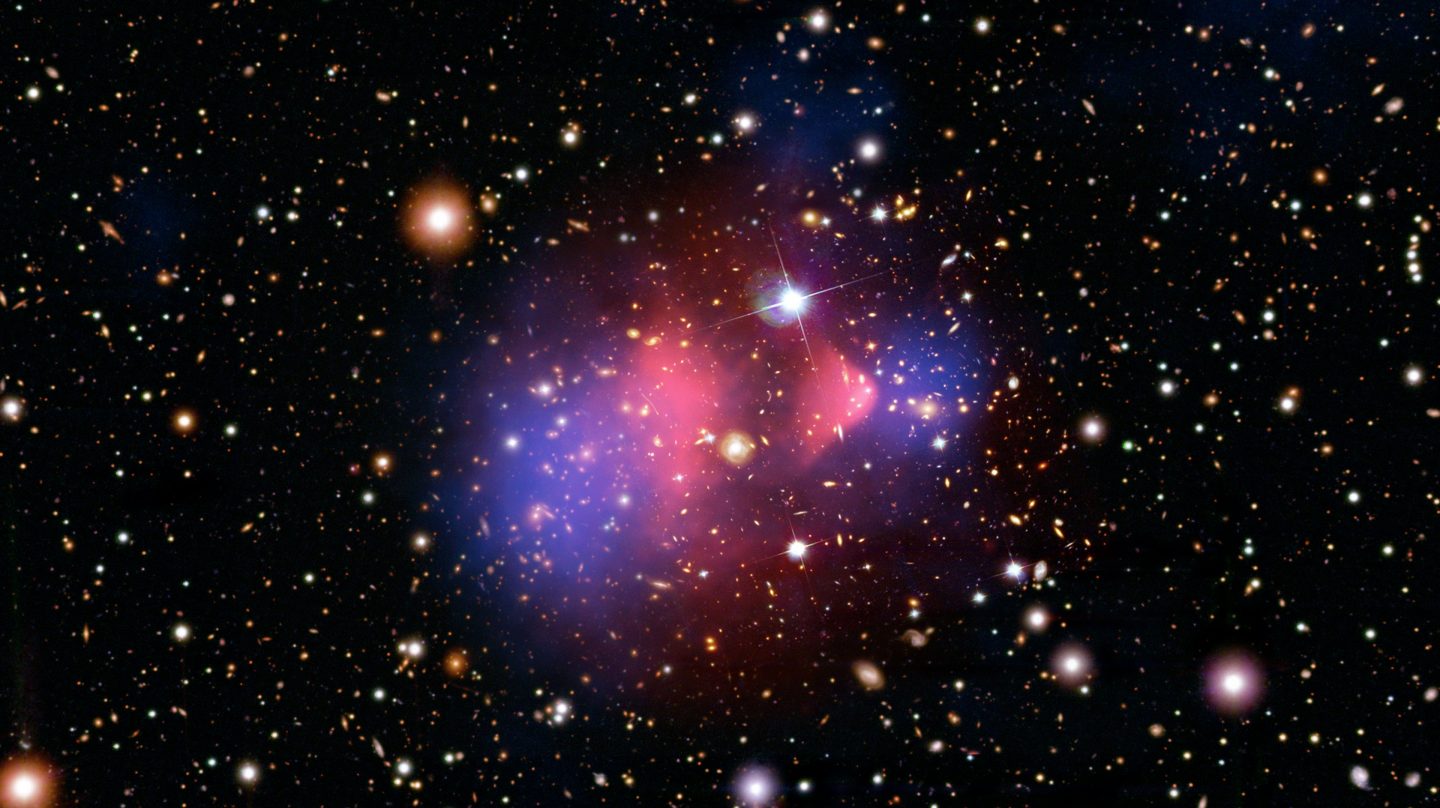 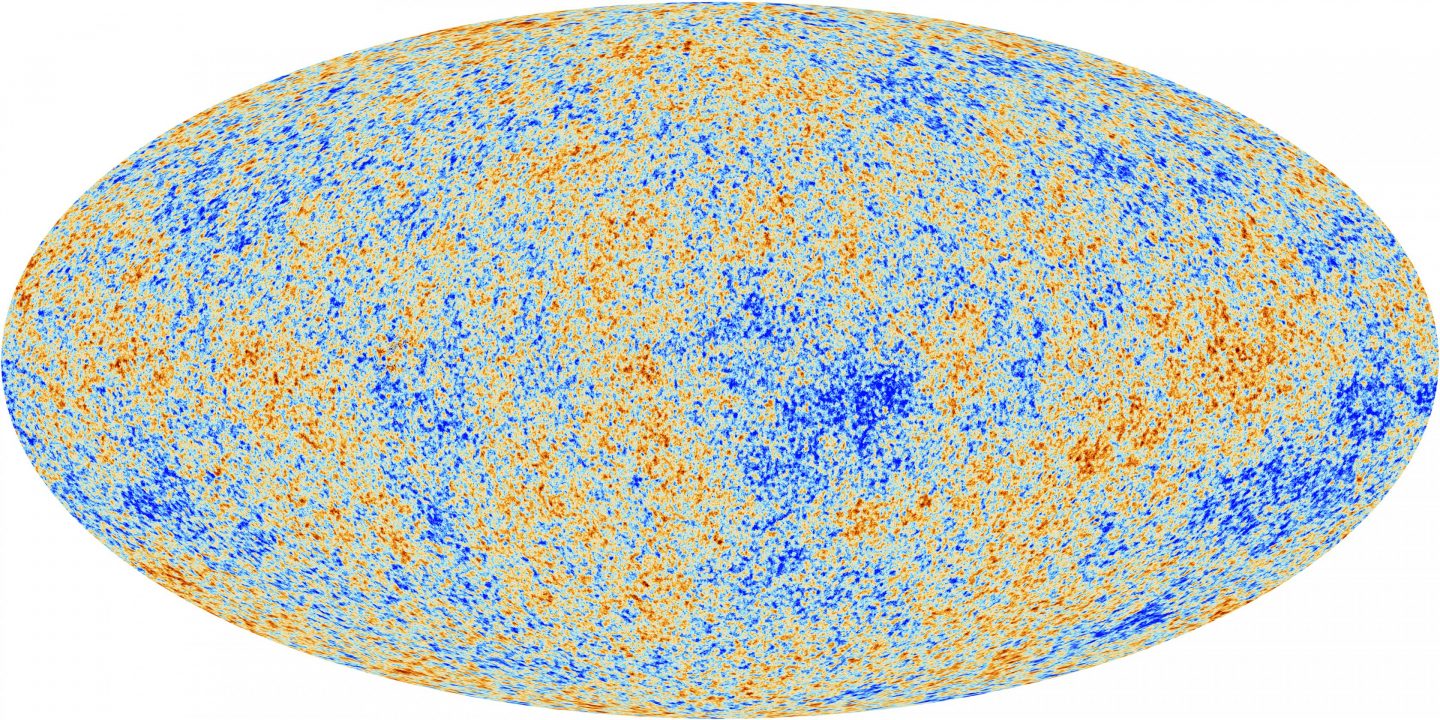 What could dark matter be?

Scientists know that something we currently call dark matter exists because of its effects on other objects in the universe, such as galaxies. From observing how galaxies spin and how light sometimes bends, astronomers know that whatever dark matter is, it must have mass. So far, everything else that has mass exists as a particle, so the current leading theory is that dark matter is also a particle. Many dark matter experiments—including those at SNOLAB—are looking for dark matter in the form of a new particle called a WIMP (weakly interacting massive particle). 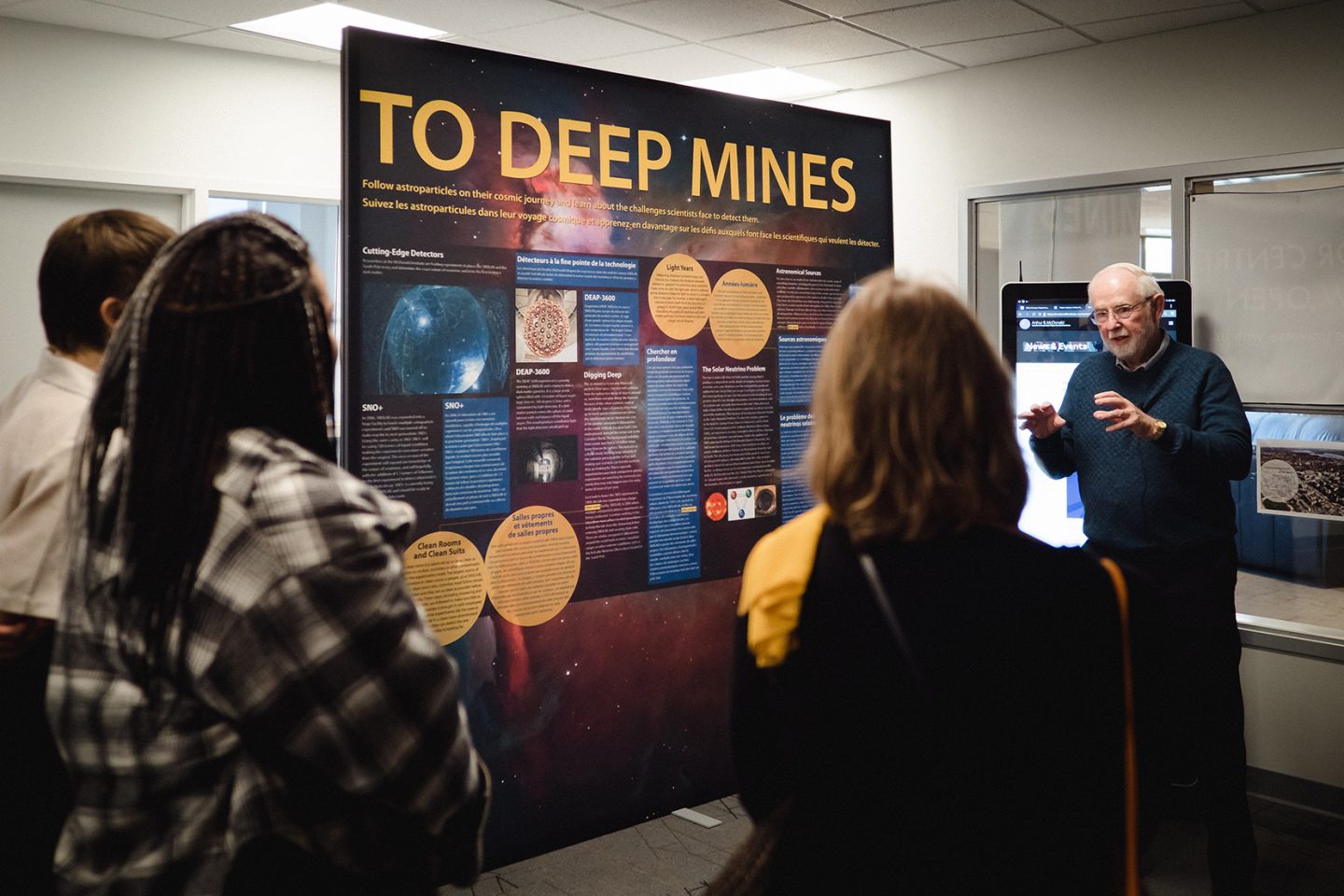 The signals from dark matter interactions are predicted to be very small, so detectors are designed to be incredibly sensitive. The challenge is that dark matter particles aren’t the only things that can interact with the detectors. Other particles, such as those that make up background radiation on Earth’s surface, can also interact with dark matter detectors. These particles (many of which come from cosmic rays) would overwhelm a signal from dark matter, so we need a way to filter them out. Setting up a dark matter detector on the Earth’s surface would be like trying to hear a pin drop at a rock concert. Two kilometres of rock acts as excellent shielding and filters out most of these particles, reducing unwanted signals by a factor of 50 million. For this reason, labs searching for rare particles are located underground. Some, like SNOLAB and Boulby Laboratory, are in mines, and some, like Gran Sasso, are built inside mountains.

Cloud chambers are a way to visualize this cosmic radiation on Earth’s surface. In the video below, appearing with images of the Drift team making their descent into SNOLAB, you can see beta particles as narrow streaks that often change direction. Their heavier cousin, the muon particle, is seen through narrow streaks that do not change direction. Finally, the larger trails are caused by alpha particles. Each particle that generates a track would create noise in the data of dark matter experiments, making it impossible to see the signal we are looking for. If a cloud chamber were set up in an underground lab, you would almost never see a particle track in it because of how much the background radiation is reduced. 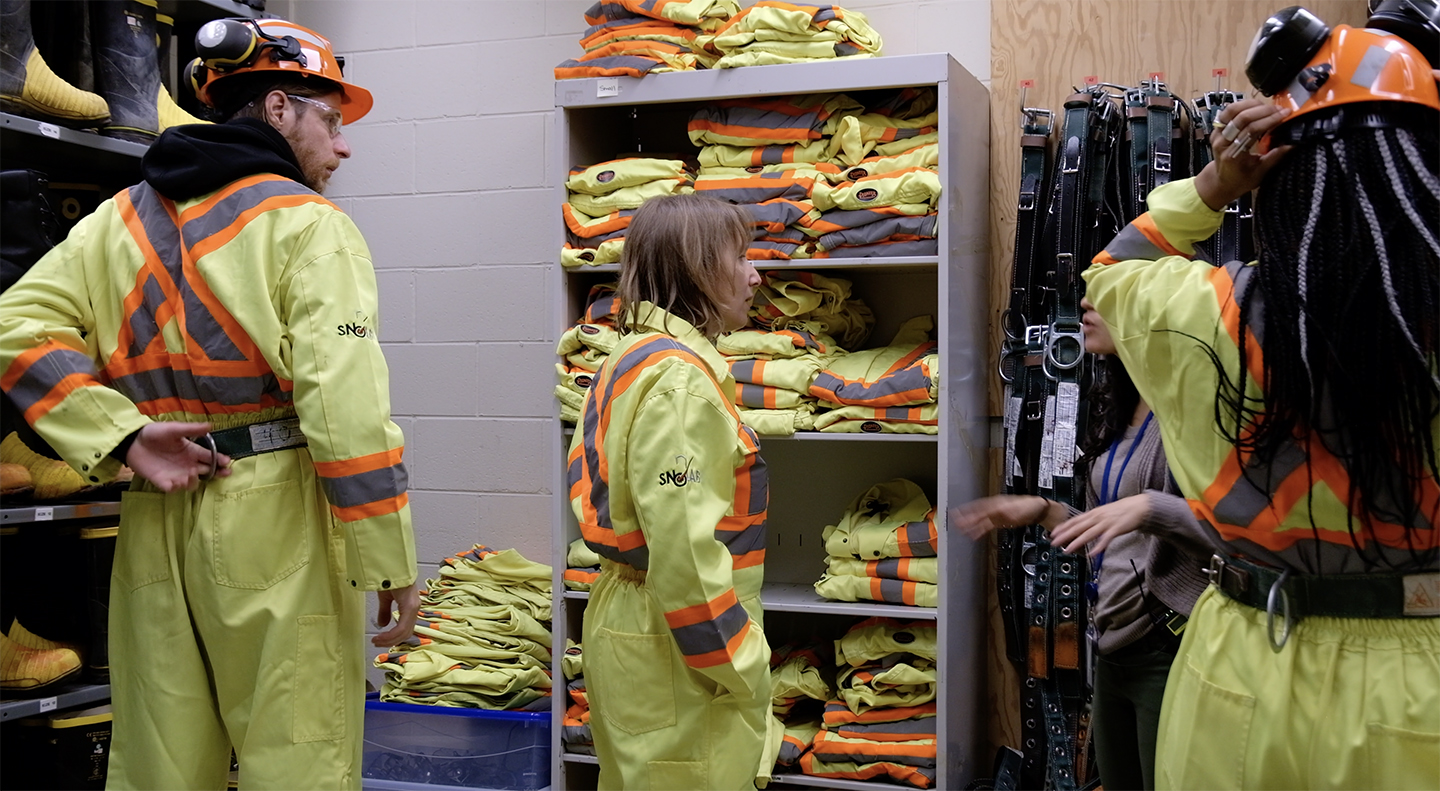 Artists Nadia Lichtig, Josèfa Ntjam and Jol Thoms suit up for their journey through the mine to SNOLAB’s underground facility. Credit: Zac Kenny 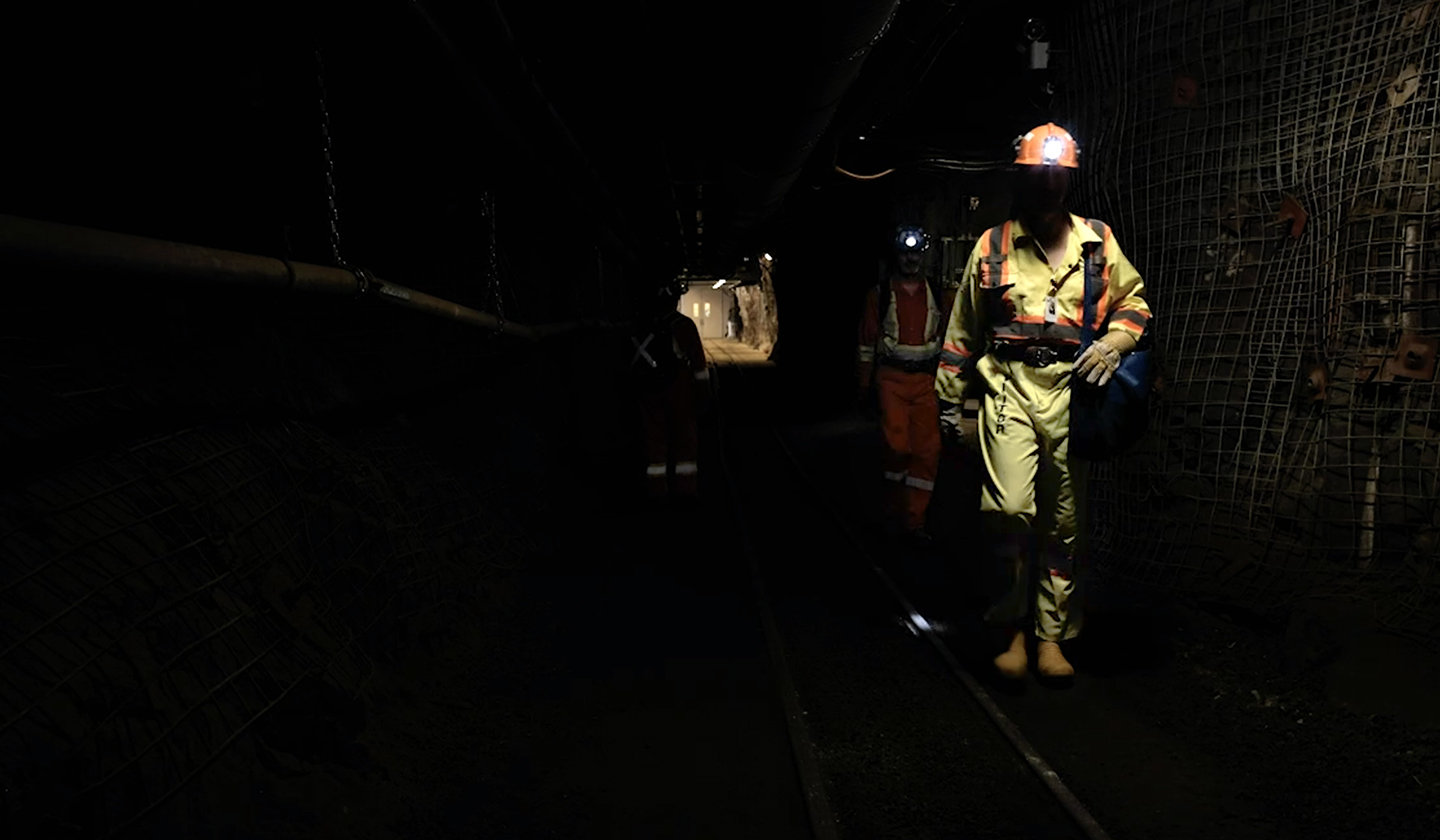 Zac Kenny from the McDonald Institute walks through the drift, a horizontal tunnel in a mine, in this case stretching between the elevator and the clean lab spaces of SNOLAB. Credit: Gerry Kingsley 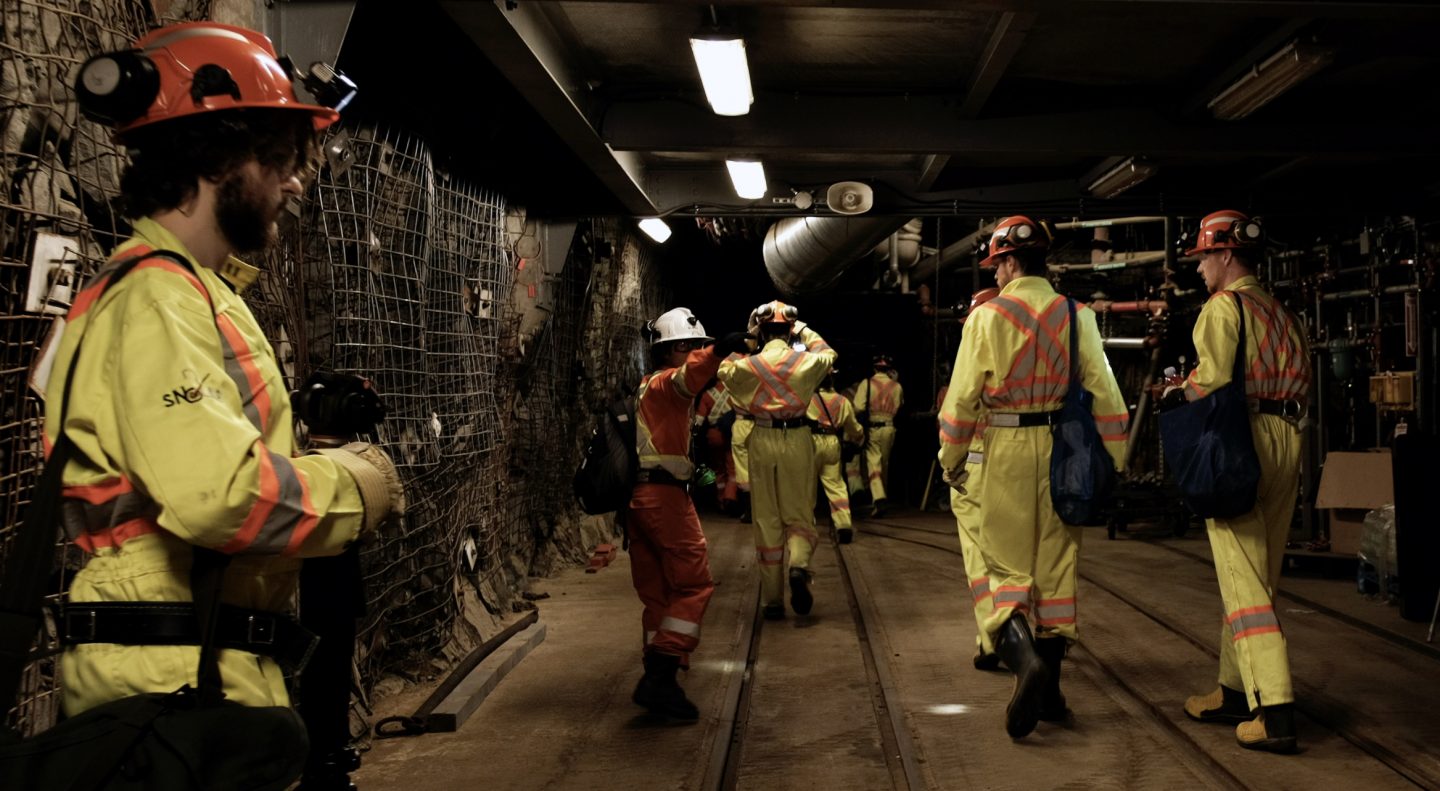 The Drift: Art and Dark Matter team, along with SNOLAB staff, prepare to walk through the drift outside of SNOLAB’s clean lab. Credit: Gerry Kingsley 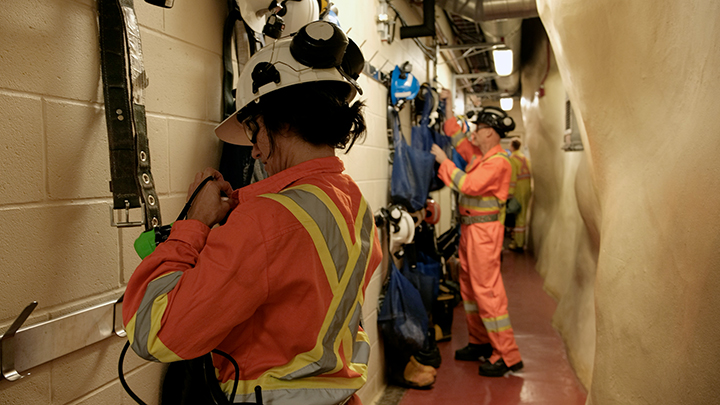 The Drift: Art and Dark Matter team, along with SNOLAB staff, prepare to enter the clean lab after walking through the drift. Credit: Gerry Kingsley 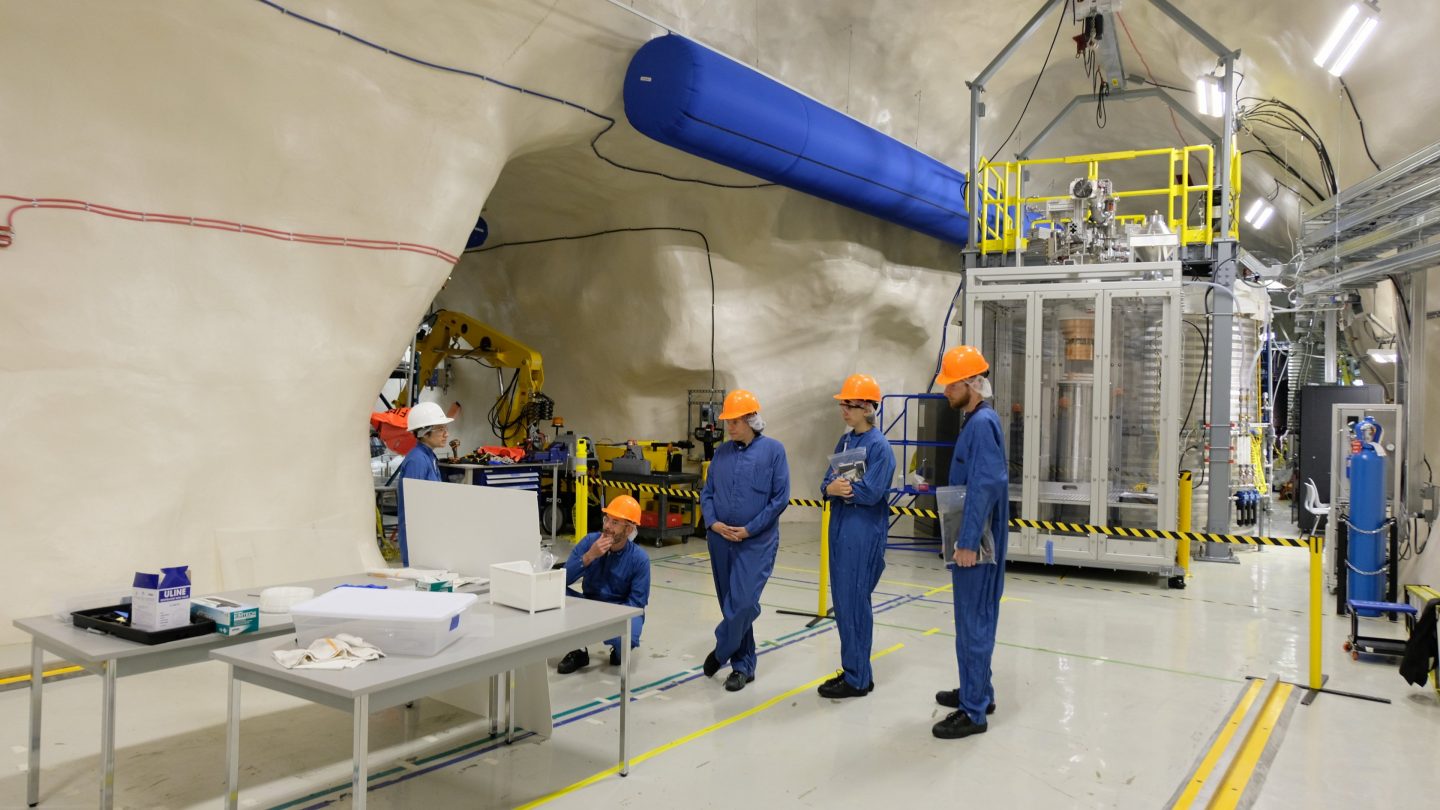 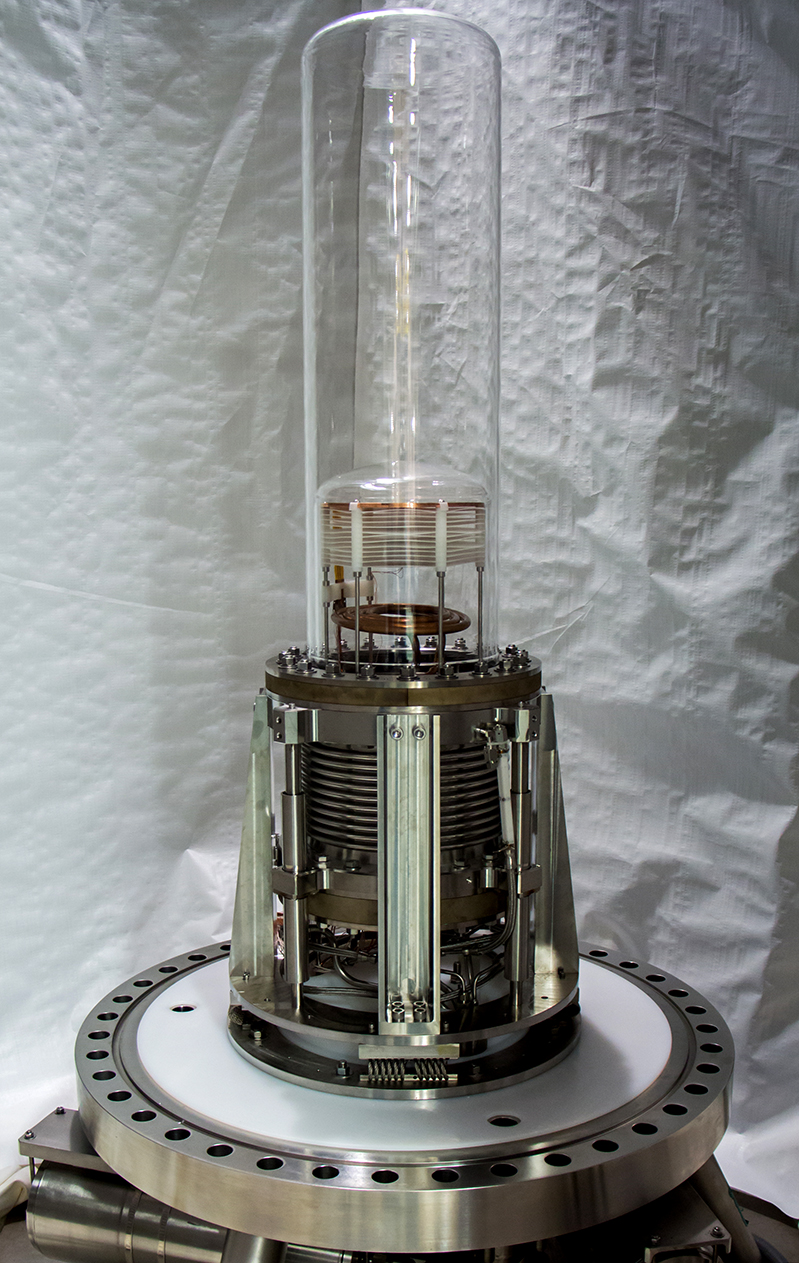 Image: The PICO Collaboration (formed from the merger of two existing groups, PICASSO and COUPP) uses bubble chambers like this one to search for galactic dark matter. Credit: Mathieu Laurin.
The PICO collaboration uses bubble chambers to search for dark matter. PICO-40 is the third detector the collaboration has operated at SNOLAB and is currently commissioning. The detector contains a super-heated fluid, held at high pressure to keep it from boiling. When a particle enters the detector it hits the target material, transferring a small amount of energy and causing a bubble to form as the material boils. The bubble is captured by microphones and cameras; studying the bubble can tell scientists about the particle that caused it. 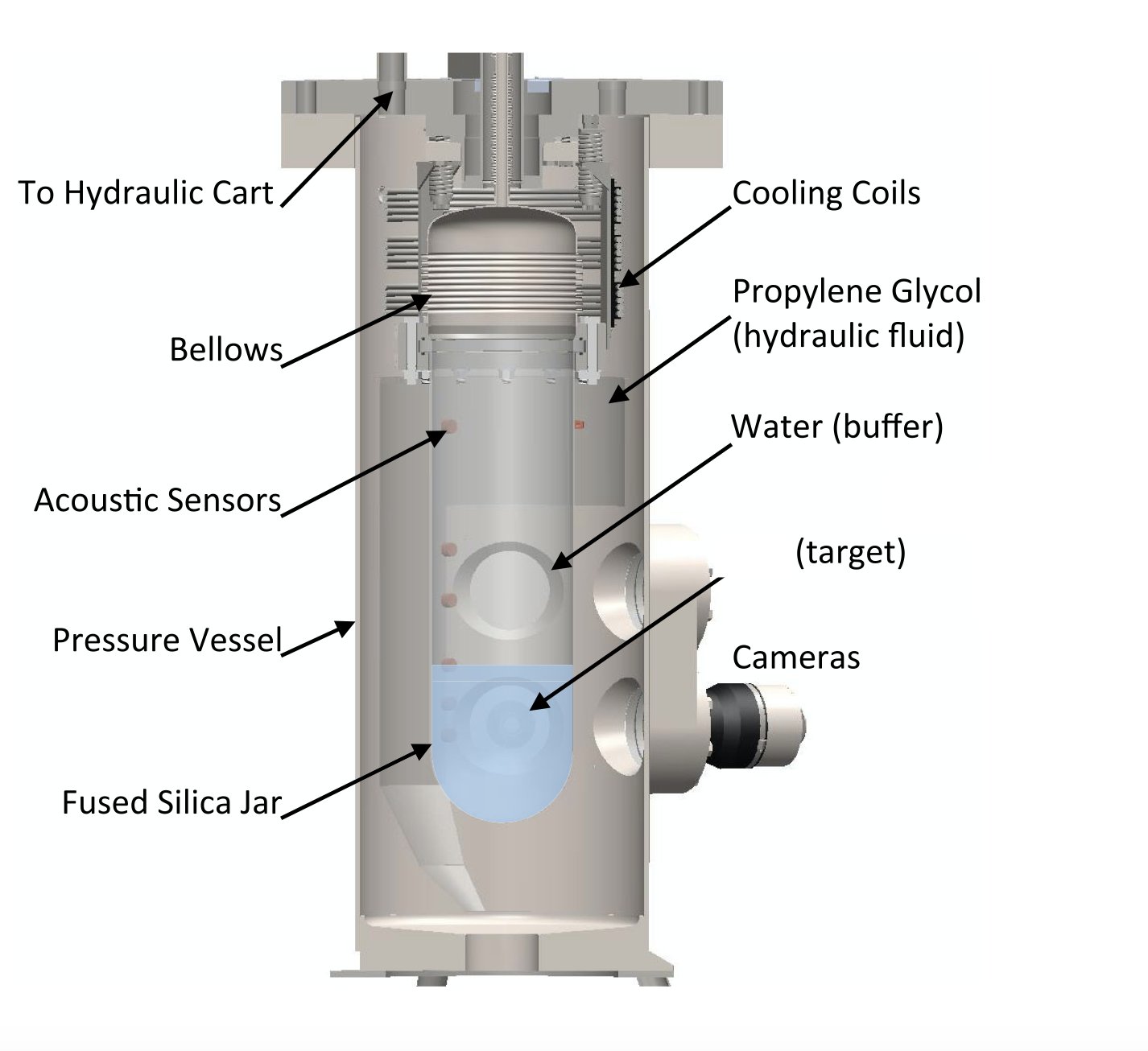 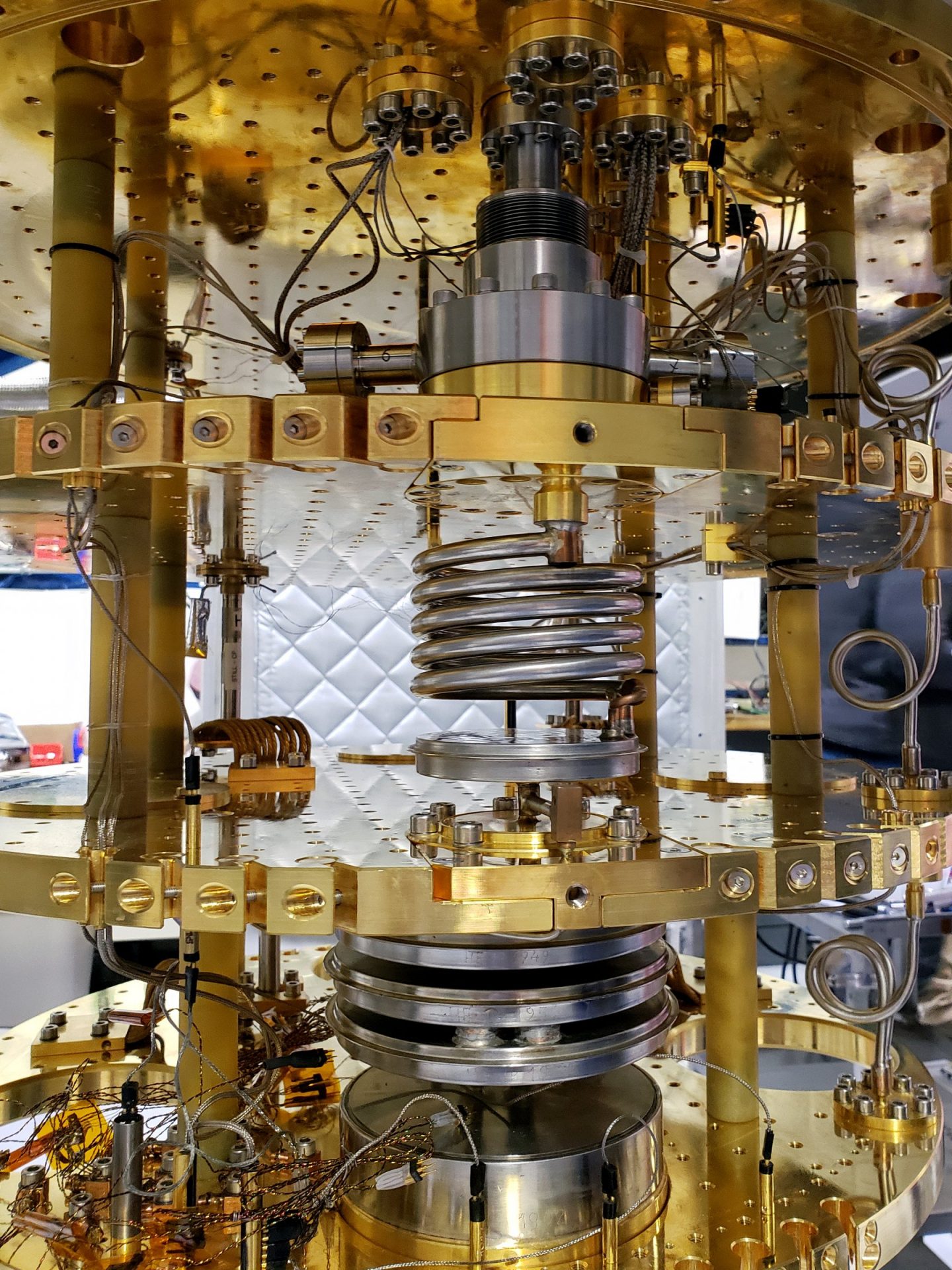 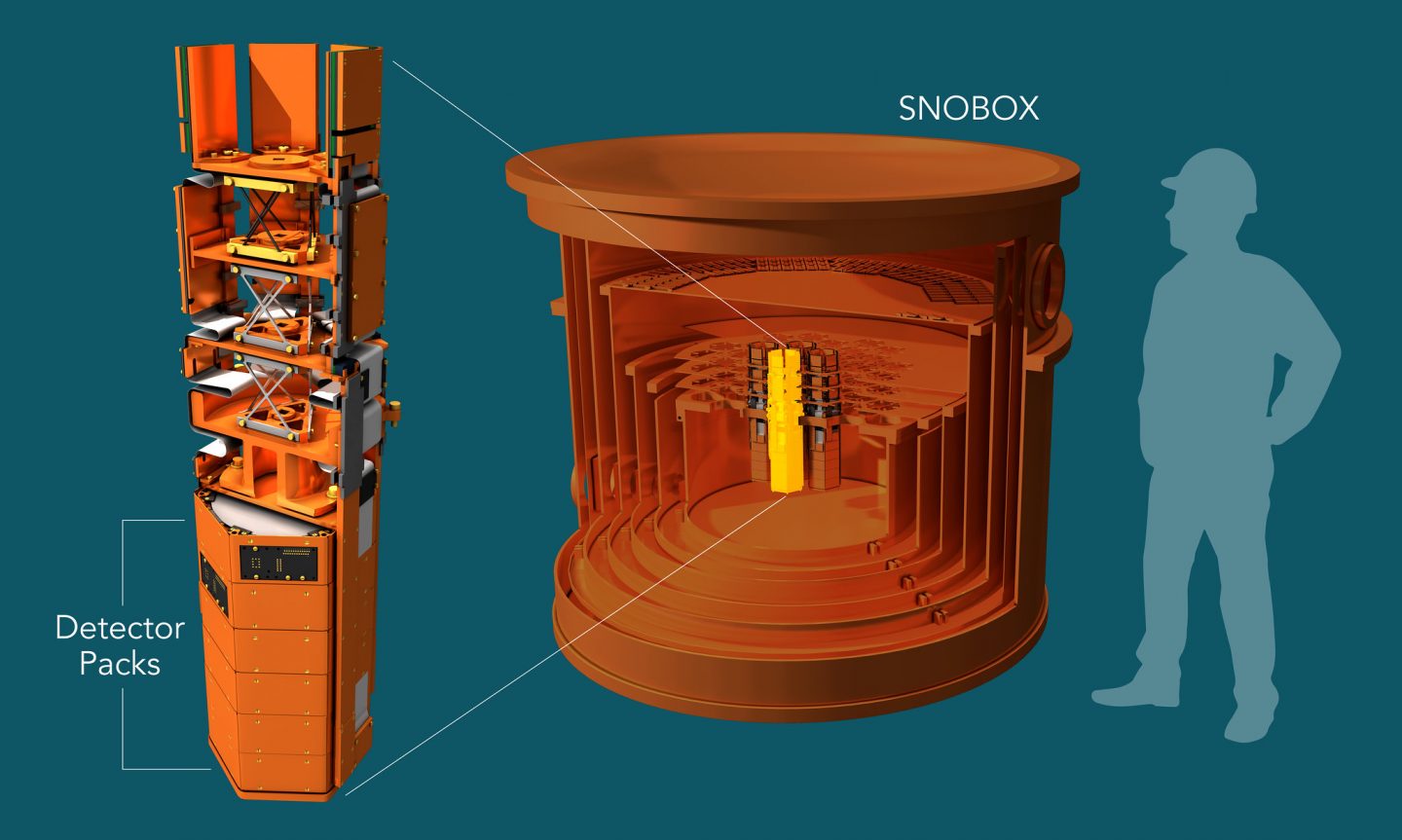 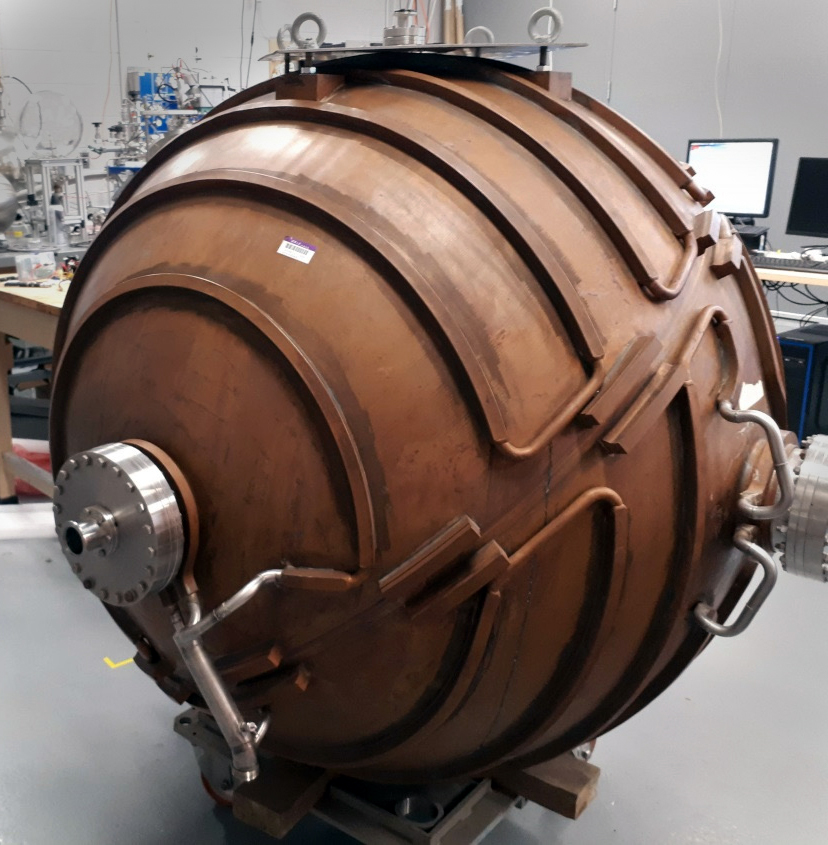 Image: NEWS-G uses a spherical copper vessel, similar to this prototype, filled with noble gas to search for dark matter. Credit: SNOLAB
NEWS-G (new experiments with spheres – gas) uses a spherical copper vessel filled with a noble gas to search for dark matter. A sensor directly in the middle of the sphere attracts any ions inside it. When a particle (such as dark matter) enters the sphere, it deposits energy and ionizes the gas, creating electrons. These electrons are attracted to the sensor, and the charge they generate can be measured. 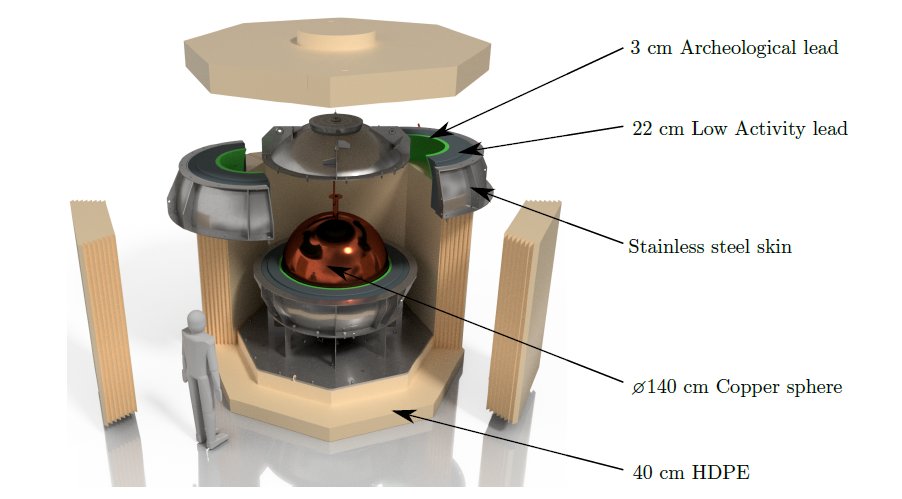 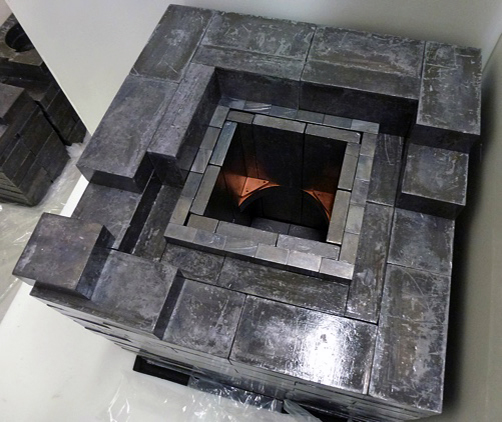 Image: The DAMIC is an experiment at SNOLAB using CCDs (charged coupled devices) to search for dark matter. Credit: DAMIC Collaboration
DAMIC uses CCDs (charged coupled devices) to look for dark matter interactions. The silicon CCDs are electrical circuits made up of many capacitors—CCDs are also used in digital cameras but those in DAMIC are larger and more sensitive. When a dark matter particle interacts, that energy change can be measured, creating a signal in the data. The CCDs are sensitive to very small changes in energy so they can detect very small interactions. 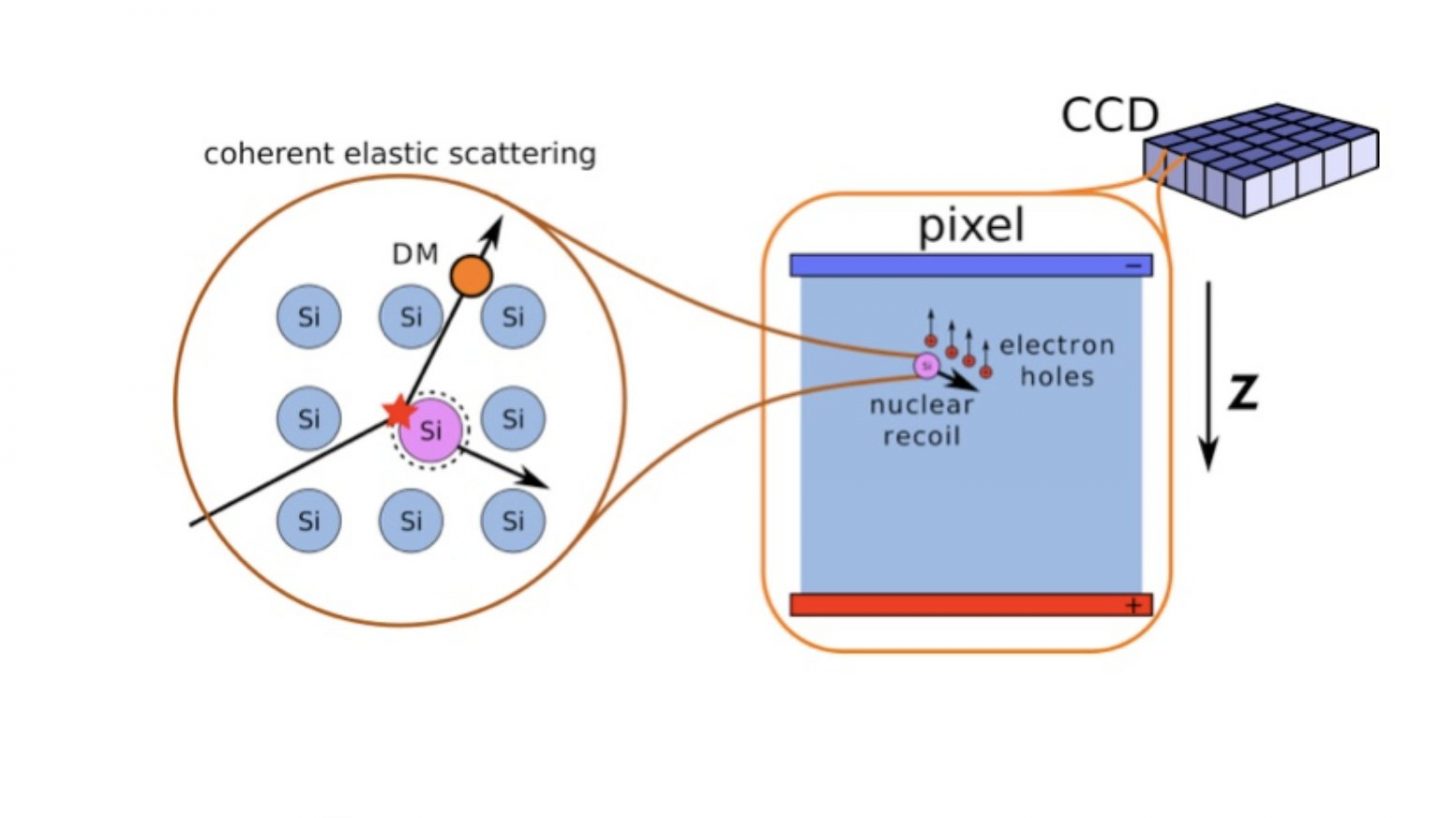 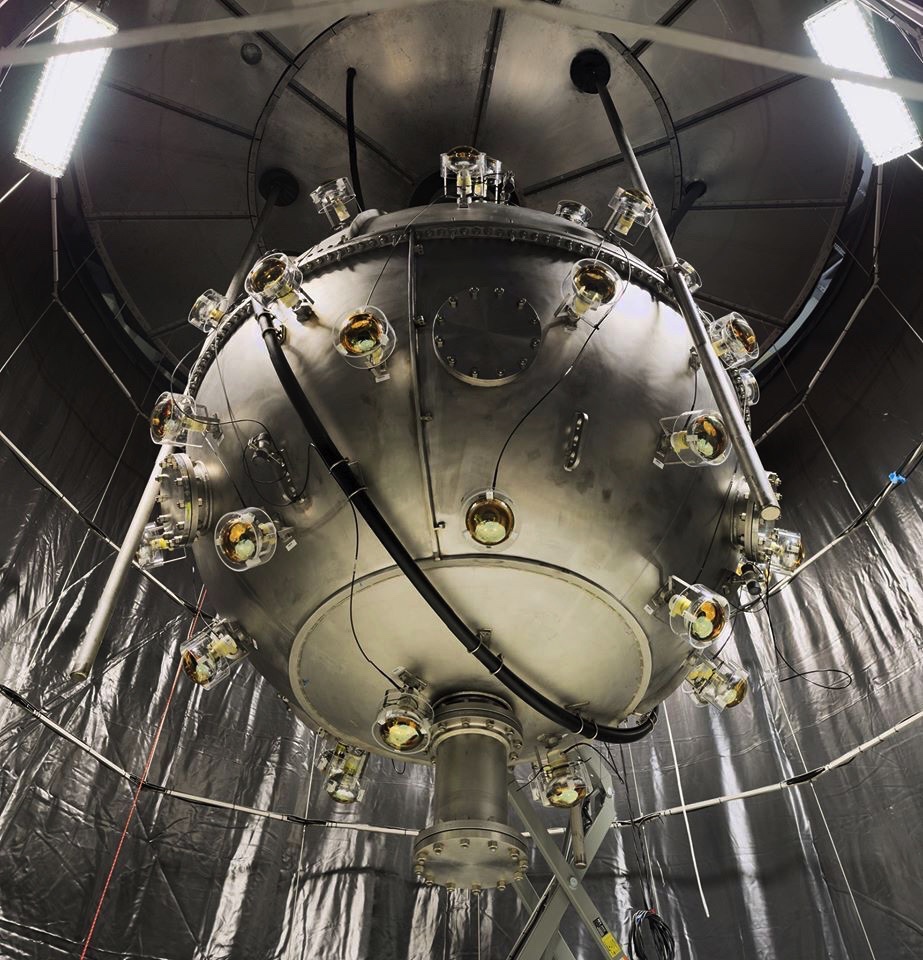 DEAP-3600 uses a vessel of liquid argon to look for dark matter. When a particle such as dark matter enters the detector, it excites some of the argon atoms. When argon atoms are excited, they produce ultraviolet light, which is detected by sensors surrounding the vessel. Studying what the signal looks like and which sensors picked it up can tell scientists about the particle that generated it. 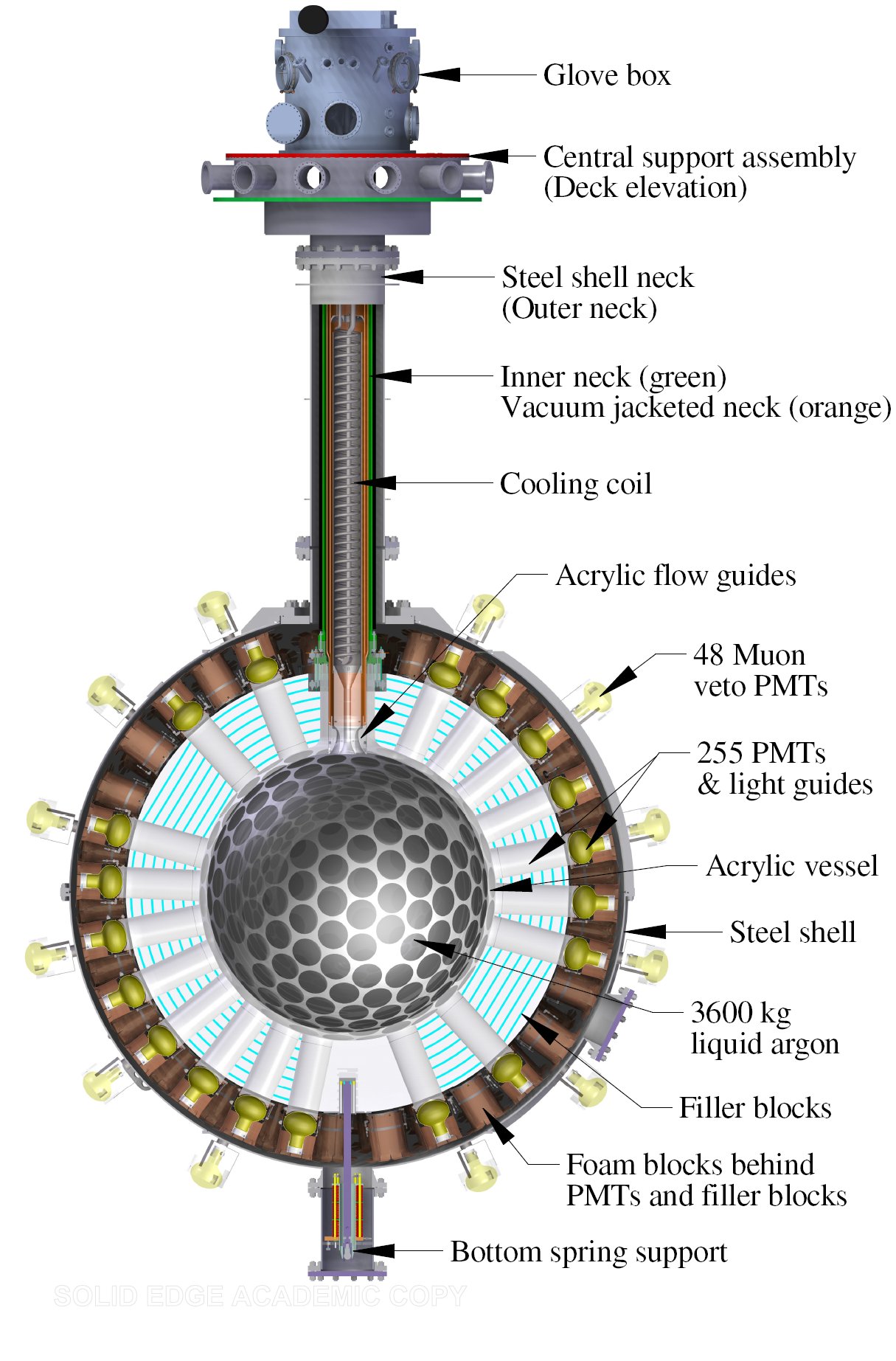 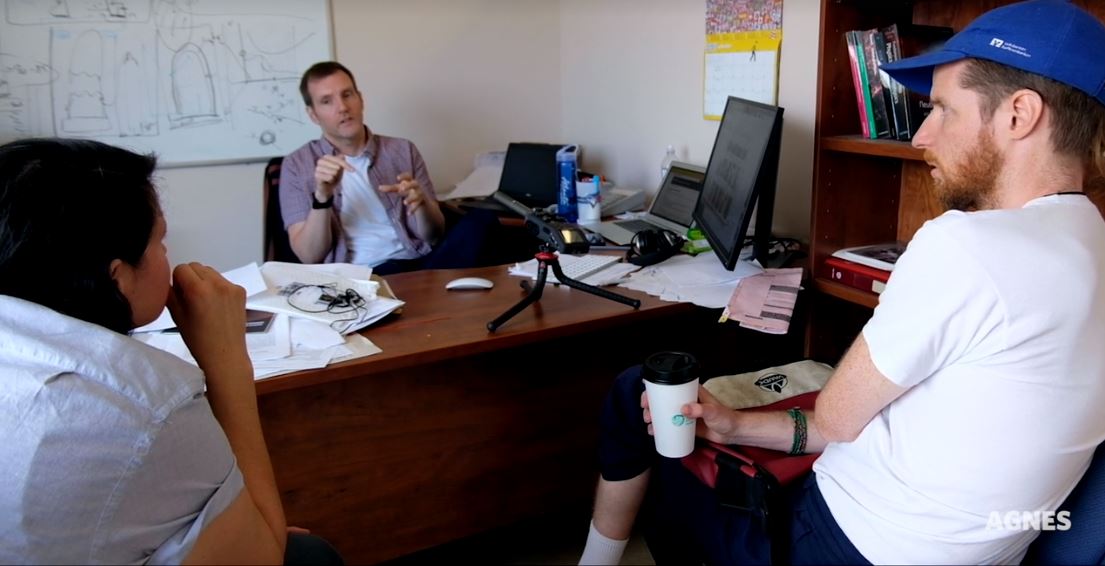 Ken Clarke: That kind of is the sound of the bubbles that we are listening for — sort of.

Jol Thoms: So, what would have been causing these bubbles?

Ken Clarke: Yeah. So, what happens is when you have a dark matter particle or something else come in, it hits a nucleus and that nucleus basically moves. And as that nucleus moves, it deposits energy. And so that energy is enough to actually cause a phase transition — so to cause it to go from liquid to gas. We are watching it with these cameras. We are also listening to it at the same time, and it turns out that the way the boiling actually happens is different for one of our major backgrounds. So, it sounds different. Even though it looks the same, it actually sounds different. So, we listen to it and we can use the sound to tell these things apart. So that gets rid of one of our backgrounds. There is another one that we cannot get rid of that way. It sounds the same, it looks the same, and so all we do is we predict how many of those events we will get in a year. And if we get that number or less, then we say we did not see anything new. If we get a whole bunch more, we say okay, well, either we got our predictions wrong or there is something going on here that we have not understood so far.

Jol Thoms: The events that we are actually hearing would be from a neutrino?

Ken Clarke: Ah. These events are probably neutrons. So, neutrons cause the exact same signals as dark matter. They cause the nucleus to bounce backwards and we cannot tell them apart. Neutrons are the one we have to predict how many we will get and then see if we get more than that. So, the crosssection is how likely the dark matter is to interact in our detector. If we are correct, then the dark matter is going through us all the time. It is just that it is very, very rare that it interacts, and that’s the cross-section. How rare it is the cross-section. How do we know that it is going to interact that way? So, we do not really. We know that it interacts gravitationally because that is how we know it is there, right? We have seen galaxies rotating and we have seen a lot of things that say that it is out there and it has mass, so it has gravity. It is affected by gravity. We think it interacts with a weak interaction, which means that it would interact with this kind of, you know, this kind of style of collision. So, we think that that is how it will happen; we do not actually know. There is a lot of dark matter models that say that it will not do that, that the dark matter is a different kind of particle. I come to these things with some experience and having been doing this for too many years, but I think it will be really interesting for this fresh set of eyes and people that are very talented and good at kind of encapsulating what is going on. We are always surrounded by people who are like us. I mean, that is what happens I think in life in general. And so, it would be very interesting to see something that is not, that’s not by people that are the same experiences.