Drift: Art and Dark Matter is an artist residency and exhibition project developed with the Arthur B. McDonald Canadian Astroparticle Physics Research Institute and SNOLAB. For this project artists Nadia Lichtig, Josèfa Ntjam, Anne Riley and Jol Thoms have been invited to make new work while engaging with scientists, theorists and engineers contributing to the search for dark matter at the McDonald Institute and at SNOLAB’s underground facility in Sudbury, located two kilometers below the Earth’s surface.

Physics research has progressed to an intriguing point where evidence and knowledge seem to balance the unknown and mysterious. While scientists have developed concrete scientific principles with established theories, models and, in some cases, indirect supporting evidence, they must continue to speculate about the qualities of undetected dark matter. Such a “known unknown” lends itself to artistic interpretation. Through Drift, the dialogue between artists and physicists and the interaction with each others’ research promise to reveal shared desires, habits and goals and spark insights. Broad contexts are brought to bear upon the art and science disciplines, which are often self-isolating. The four artists of national and international stature apply their aesthetic approaches to events of being, fragilities of agency and global environmental degradation. In the laboratory context, they develop integrally challenging and rigorous articulations of racialized, Indigenous and entangled identity. These articulations are accessible entryways into the science. The artists also ask whether methods of “queering” and “decolonizing” art and science might be productive avenues for shared investigations of dark matter. Finally, by interacting with the artists and their artworks through a program in which scientists directly respond to the art, the scientists may possibly come away with new ideas and perspectives. 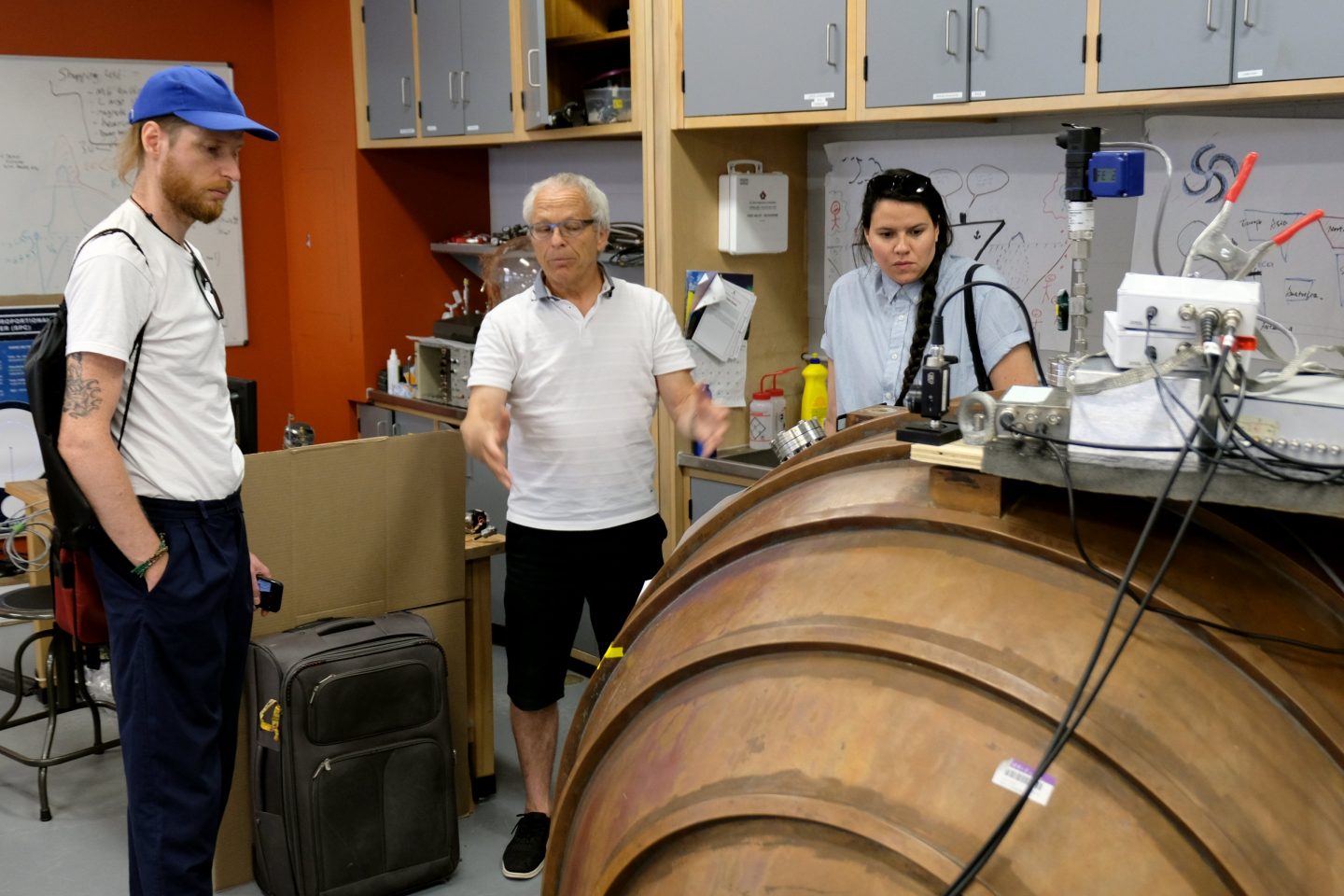 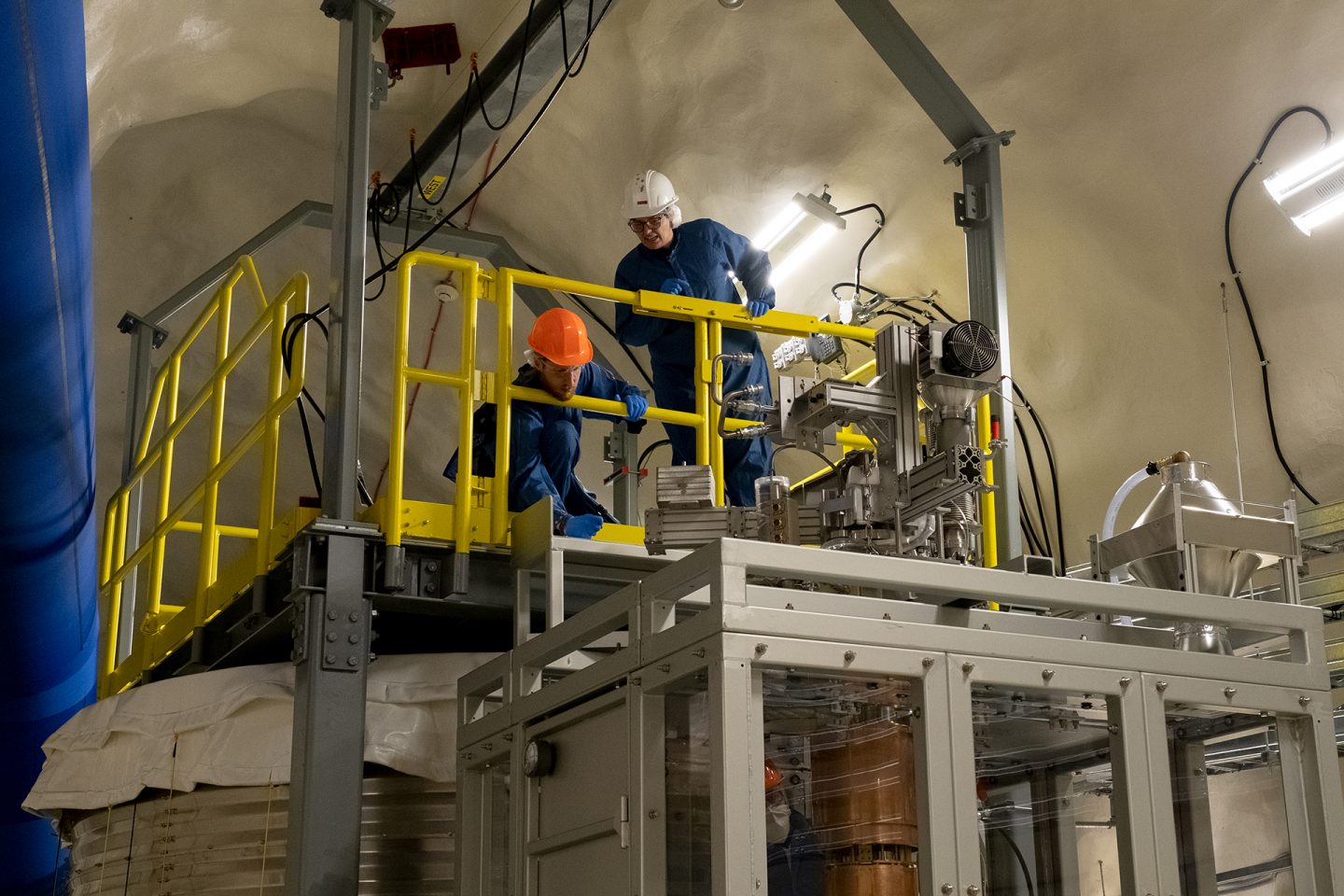 The first stage of the residency took place over two extended site visits in July and October of 2019, during which artists, scientists and other scholars connected with each other in both Sudbury and Kingston. These diverse interactions ranged in focus from the basics of dark matter and neutrino physics to ancient underground water and Anishinaabe cosmology, and included artist talks, discussions and hands-on engagement with the unique research experiments and field trips generously made available through Drift’s partnering institutions.

In the months leading up to the exhibition, the residency includes a period of home studio production for the artists and digital dialogue among themselves and researchers intended to advance their art production. Second, Elvira Hufschmid has been funded by Queen’s Cultural Studies as a graduate researcher to develop “translation intensives” wherein physicists will experience and respond directly to the art works. The goal of the residency is the opening of new avenues of exchange and hybridity and to produce an exhibition experience that can offer new comprehensions of the thrilling advanced science being done across Canada today. Drift: Art and Dark Matter will run at the Agnes Etherington Art Centre from 9 January–11 April 2021 before touring across Canada. 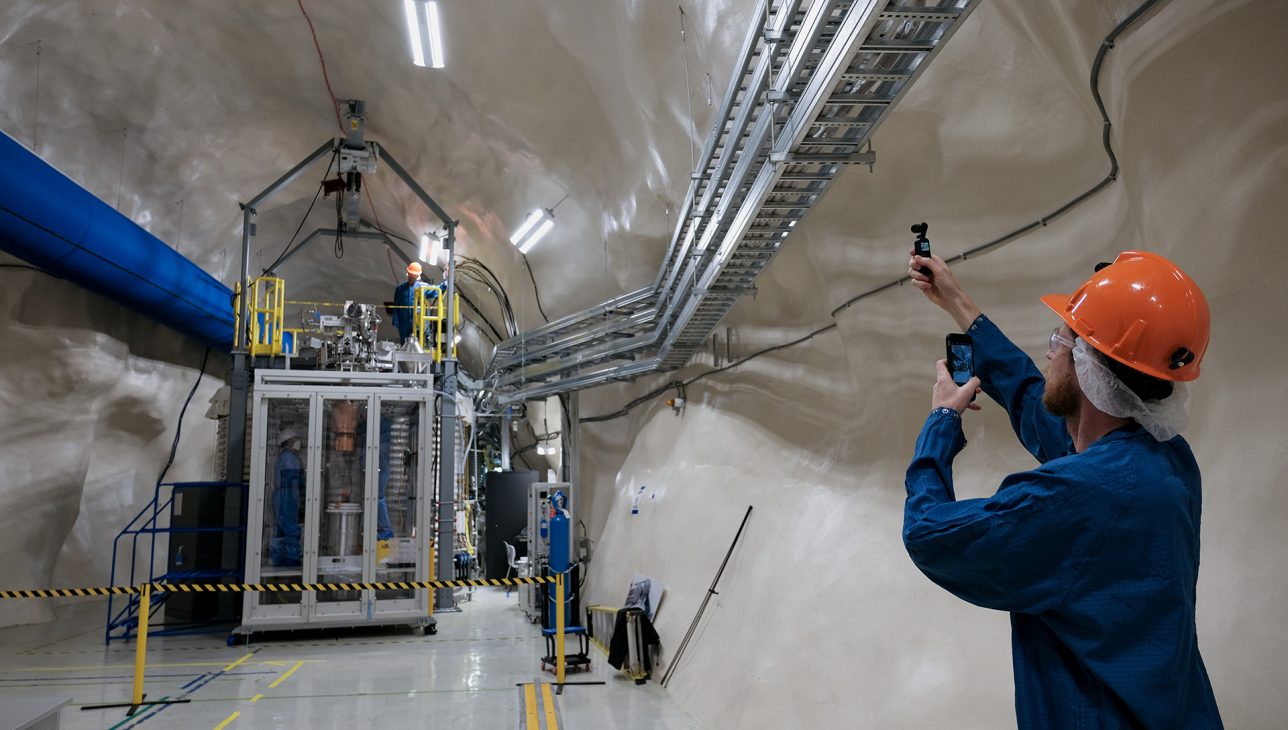 Numerous voices contributed to the collective residency experience. Site visits at SNOLAB were led by Blaire Flynn, Samantha Kuula, Chelsea Pike and Jenna Saffin. Underground at SNOLAB, Dr Tony Noble who works on the DEAP-3600 liquid argon experiment and the PICO experiment spoke with the artists. Dr Ken Clark who also works on PICO and Dimpal Chauhan who is an assay scientist introduced their work. Dr Silvia Scorza presented cryogenic dark matter search (Super CDMS) and its equipment. Dr Pierre Gorel, Dr Chris Jillings, Dr Ian Lawson, Dr Erica Caden, and Dr Nigel Smith, each met with the artists. Physicist Miriam Diamond spoke via satellite to discuss the potential practical applications of dark matter research and some of the larger questions at the heart of this scientific pursuit. The team visited the Science North planetarium to learn about Indigenous constellations and teachings and to view a global survey of the different ways of searching for dark matter.

Visiting Kingston and Queen’s University, the artists had an opportunity to speak with Dr Arthur B. McDonald, the co-recipient of the 2015 Nobel Prize in Physics, about the intersections of art and science. A tour of the Physics Department led by Zachary Kenny, Alex Pedersen and Mark Richardson allowed for discussions with Dr Gilles Gerber, Dr Aaron Vincent.  Dr Mark C Chen, and Theoretical Physicist Dr Joe Bramante. The visit to Queen’s also included a trip to Dr Peng Wang’s crystal lab and moon, star and planet-gazing at the Queen’s Observatory. Graduate students Sebastien De Line, Yasmine Djerbal and Elvira Hufschmid met with the artists to talk about shared research interests. Curatorial Assistant, Michelle Bunton assists with organization and implementation of residency programming. 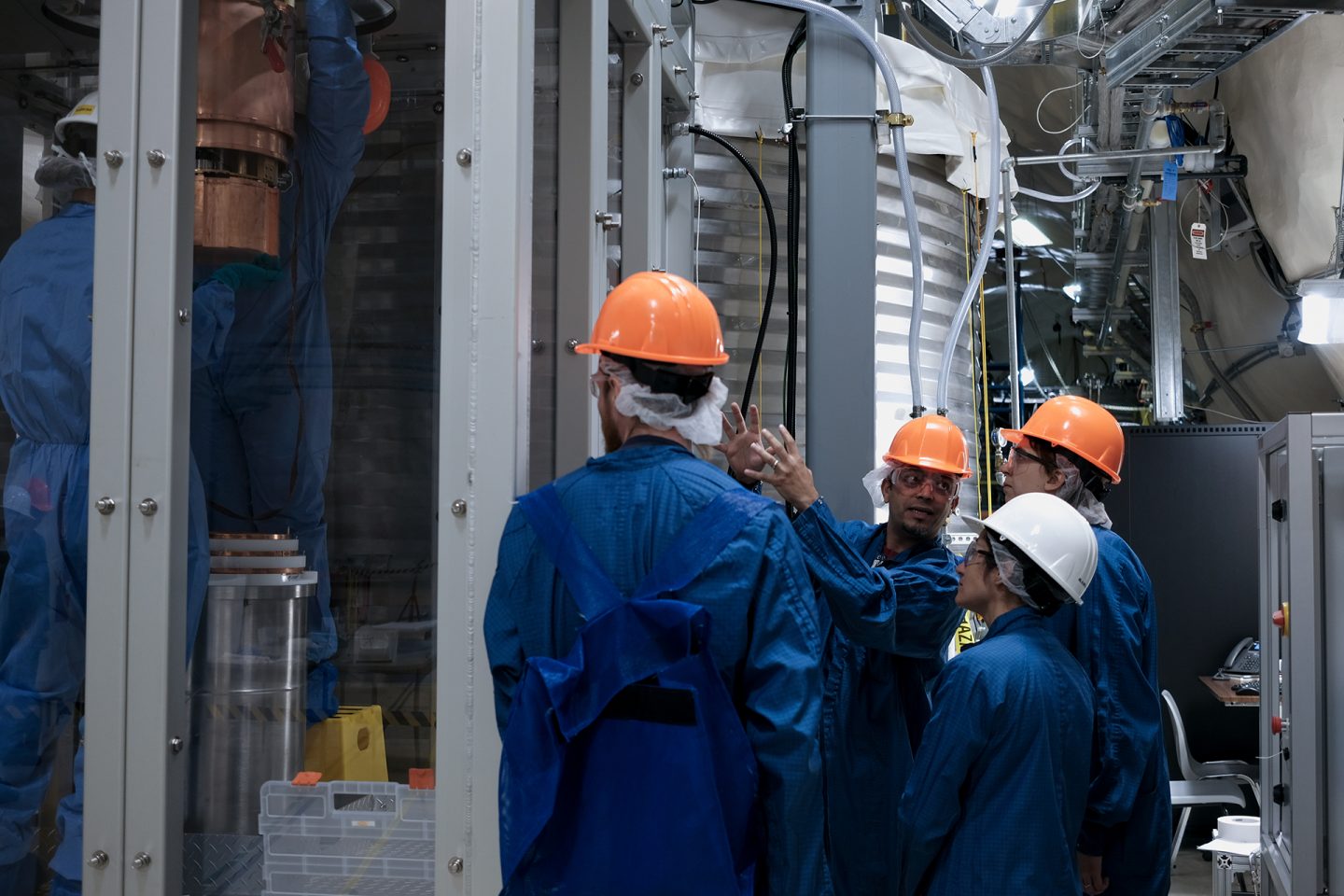 SNOLAB staff provide the Drift: Art and Dark Matter team with an explanation of CUTE (a Cryogenic Underground Test Facility). 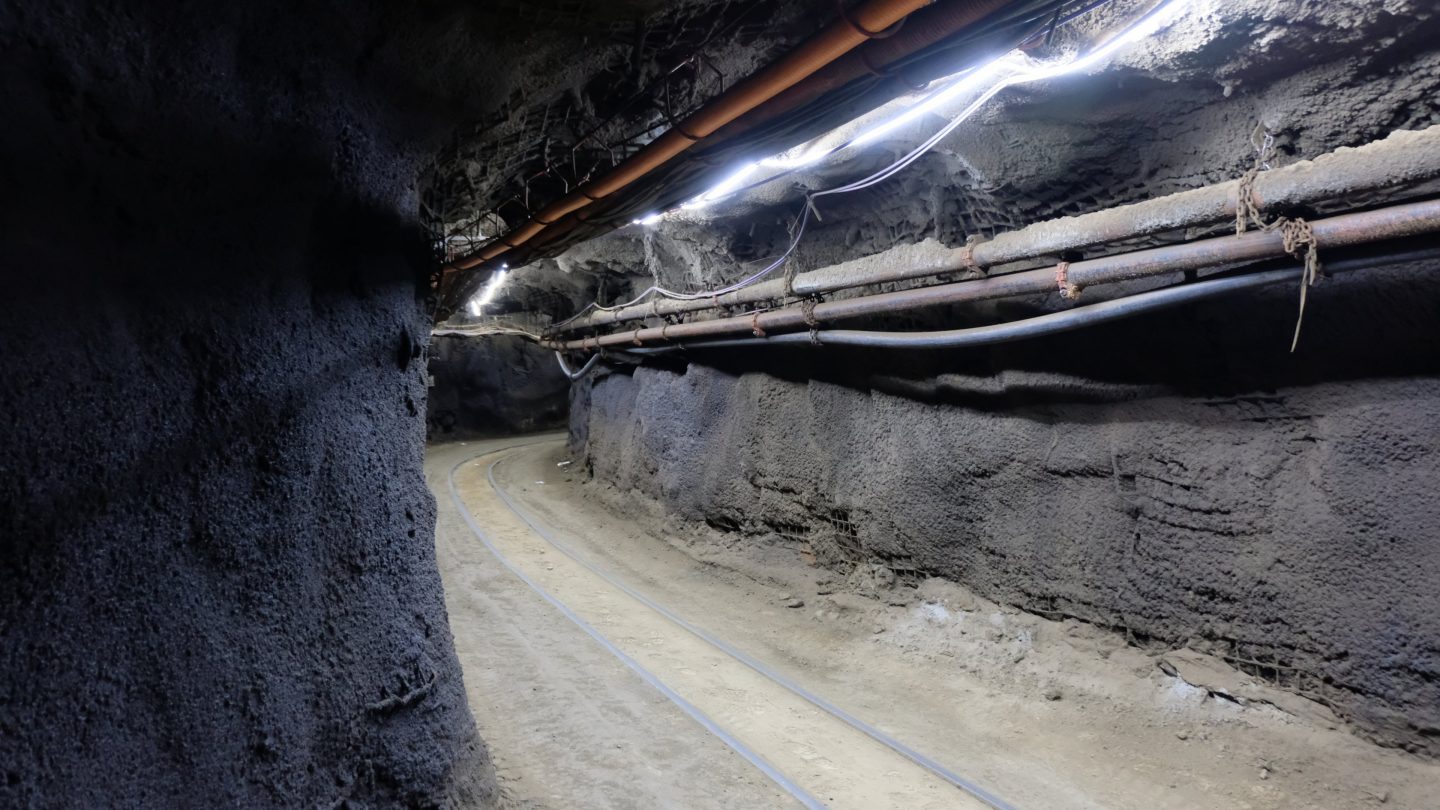 The drift, a horizontal tunnel in a mine, in this case stretching between the elevator and the clean lab spaces of SNOLAB.

The Arthur B. McDonald Canadian Astroparticle Physics Research Institute is the Canadian hub for astroparticle physics research, uniting researchers, theorists, and technical experts within one organization. Located at and led by Queen’s University, the McDonald Institute is proud to have thirteen partner universities and research institutes across the country, all of which are key players in Canada’s past and future innovation in astroparticle physics. VISIT website >

SNOLAB is a world-class science facility located deep underground in the operational Vale Creighton nickel mine, near Sudbury, Ontario in Canada. The combination of great depth and cleanliness that SNOLAB affords allows extremely rare interactions and weak processes to be studied.  The science programme at SNOLAB is currently focussed on sub-atomic physics, largely neutrino and dark matter physics. SNOLAB seeks to enable, spearhead, catalyze and promote underground science, while inspiring both the public and future professionals in the field. VISIT website >

Anne Riley is a multidisciplinary artist living as an uninvited Slavey Dene/Cree/German guest from Fort Nelson First Nation on the unceded Territories of the Musqueam, Squamish and Tsleil-waututh Nations. Her work explores different ways of being and becoming, touch, and Indigeneity. Riley received her BFA from the University of Texas at Austin in 2012. She has exhibited both in the United States and Canada. Riley moved to Vancouver in 2013, having grown up and pursued her undergraduate studies in Texas. Currently she is working on a public art project commissioned by the City of Vancouver with her collaborator, T’uy’tanat Cease Wyss. Wyss and Riley’s project A Constellation of Remediation consists of Indigenous remediation gardens planted throughout the city, decolonizing and healing the dirt back to soil.

Riley’s that brings the other nearly as close as oneself, included in the 2015 exhibition Every Little Bit Hurts at Western Front, foregrounded touch, impression and embodied experience. It featured a wall drawing created by the artist rubbing, dragging and moving her body across the gallery wall wearing raw-dyed denim. “I’m interested in queer touch as a radical act,” she says. “It’s not always possible because of fear. But I’m also investigating first touch between mother and child. I have the same hands as my mother and my great grandmother.”

Thomso graduated with an Honors BA in Philosophy, Art History and Visual Studies from the University of Toronto (2009) and later studied under Prof. Simon Starling at the Städelschule in Frankfurt (2013). Between 2014 and 2016 he developed and taught an experimental creative-research program for architecture students at the University of Braunschweig with then interim director Tomás Saraceno. In 2016 Thoms won the MERU Art*Science Award for his film G24|0vßß, which was installed in the Blind Faith: Between the Cognitive and the Visceral in Contemporary Art group exhibition at Haus der Kunst, Munich.