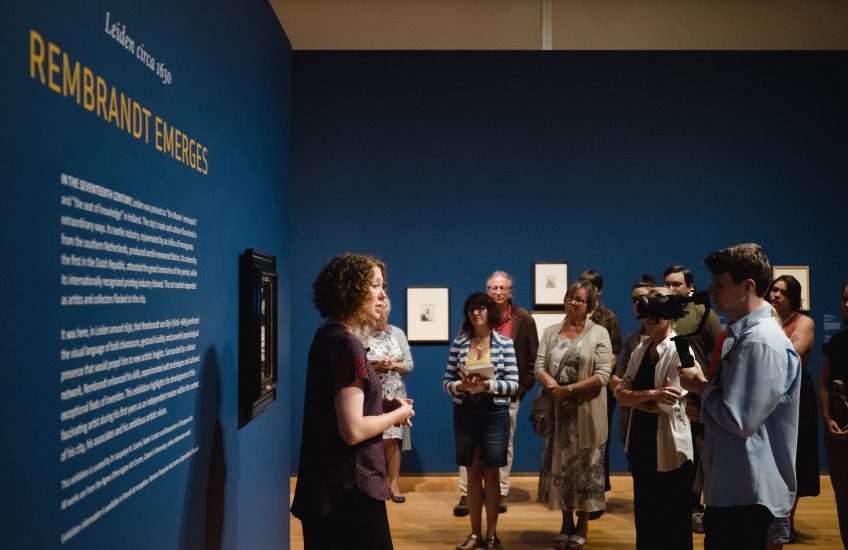 Three and a half centuries after his death, Queen’s University’s Agnes Etherington Art Centre debuted a touring exhibition celebrating the emergence of one of history’s most renowned artists: Rembrandt van Rijn. Drawing on the strengths of the museum’s Bader Collection, the exhibition – Leiden circa 1630: Rembrandt Emerges – will appear in four Canadian cities and features works of art by Rembrandt, his colleagues, and his students, that reflect the creative environment and influences that shaped the earliest years of his career.

“Agnes Etherington Art Centre at Queen’s continues to flourish as a place of esteemed cultural and academic excellence,” says Teri Shearer, Queen’s Deputy Provost (Academic Operations and Inclusion). “The opening of this touring exhibition demonstrates the scholarly importance of the museum’s work, and highlights the international prominence of the collection housed there. The inspiring, experiential learning opportunities it presents to the Queen’s and Kingston communities are invaluable.”

The exhibition opens to the public only months after the Agnes unveiled Rembrandt’s 1659 work Head of an Old Man with Curly Hair. Linda and Daniel Bader donated the piece to the museum in memory of Daniel’s late father and Queen’s alumnus, Alfred Bader. Dr. Bader, chemist, entrepreneur, visionary philanthropist, and discerning collector of art, passed away last December.

Head of an Old Man with Curly Hair joined three of Rembrandt’s acclaimed works donated by Alfred and Isabel Bader between 2003 and 2015. Though Head of an Old Man with Curly Hair is not part of this exhibition, as it is from later in the artist’s career, many works from the Bader Collection, and loaned works from across North America will be on view and travel nationally as part of the exhibition. Together, the works investigate the experimentation, emulation, and ambition of artists in 17th century Leiden, Netherlands.

Accompanying the exhibition is an illustrated catalogue, in both English and French, that features essays by leading scholars in Dutch art, including Bader Curator/Researcher of European Art, Jacquelyn N. Coutré, and Bader Chair in Northern Baroque Art, Stephanie S. Dickey, as well as entries on the exhibited works by Coutré. An in-gallery and online interactive map of Rembrandt’s Leiden, as well as a short documentary about the contemporary city, animates the city’s history as part of this exhibition as well.

“This exhibition highlights the wonderful examples of Dutch art in Canadian collections, and deepens our understanding of the early careers of Rembrandt and his circle,” says Coutré. “The origin of this show is our Head of an Old Man in a Cap of circa 1630, the first Rembrandt painting presented to the Agnes by Alfred and Isabel Bader in 2003. Support from Bader Philanthropies and from Isabel Bader, in the form of a recent gift of three paintings featured in the exhibition, has thus been a deeply meaningful contribution to this exhibition.”

The Aug. 24 public launch of Leiden circa 1630: Rembrandt Emerges at Agnes Etherington Art Centre, Queen’s University marks the first showing of the exhibition as it embarks on a national tour. Between August 2019 and May 2021, the exhibition will make extended appearances at the Art Gallery of Alberta in Edmonton, the MacKenzie Art Gallery in Regina, and the Art Gallery of Hamilton in Hamilton. The catalogue and the exhibition tour are supported by grants from the Isabel and Alfred Bader Fund, a Bader Philanthropy; and the Government of Canada.

To learn more about the exhibit and the Fall Season, visit the Agnes Etherington Art Centre’s website.