New season at Agnes to feature Shame and Prejudice exhibition 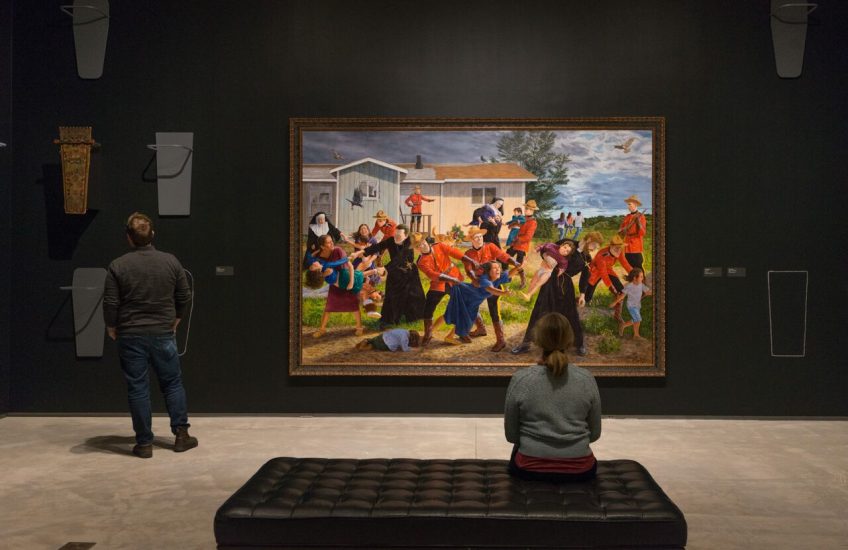 Among the many interesting art exhibitions at the Agnes Etherington Art Centre this season is a provocative exhibition from Indigenous artist Kent Monkman.

A new exhibition of Indigenous paintings and artifacts at the Agnes Etherington Art Centre is sure to draw interest and help visitors reflect on Canada’s history this winter.

Created in response to the country’s sesquicentennial celebrations, Shame and Prejudice: A Story of Resilience by Indigenous artist Kent Monkman casts a critical eye on the history of interactions between Indigenous peoples and Canadian settlers over the years. Monkman is a renowned Canadian artist and curator of Cree ancestry.

“We’re tremendously proud to present this profound exhibition at the Agnes,” says Jan Allen, Director of the Agnes Etherington Art Centre. “Kent Monkman has created a critical tour-de-force that powerfully blends a devastating history with rapier-like wit. This is the not-to-miss exhibition of the season.”

Paintings capture scenes such as children being taken from their families to be sent to residential schools, and the rights of Indigenous leaders being signed away before their eyes. Mr. Monkman’s paintings employ parody, using familiar scenes or famous paintings and a traditional 19th century European painting style combined with a twist that is designed to shock and surprise viewers.

The exhibit also includes artifacts such as the moccasins of Chief Pîhtokahanapiwiyin (Poundmaker), and traditional cradle boards which were used primarily by Indigenous women as a baby carrier.

This circulating exhibition was produced by the Art Museum at the University of Toronto in partnership with the Confederation Centre Art Gallery, Charlottetown, and has been made possible in part by the Government of Canada and the Ontario Arts Council. The lead sponsor of the exhibit was the Donald R. Sobey Family Foundation. The exhibit’s appearance at the Agnes was made possible by The George Taylor Richardson Memorial Fund, Queen’s University.

Shame and Prejudice will be at the Agnes until early April. Due to space limitations, the entire exhibition will not be on display. See a preview of the exhibit and learn more about related events on the Agnes Etherington Art Centre’s website.

The Winter 2018 Season Launch at the Agnes Etherington Art Centre will be held Thursday, Jan. 18 at 6 pm. For more information, visit the Queen’s Events Calendar.