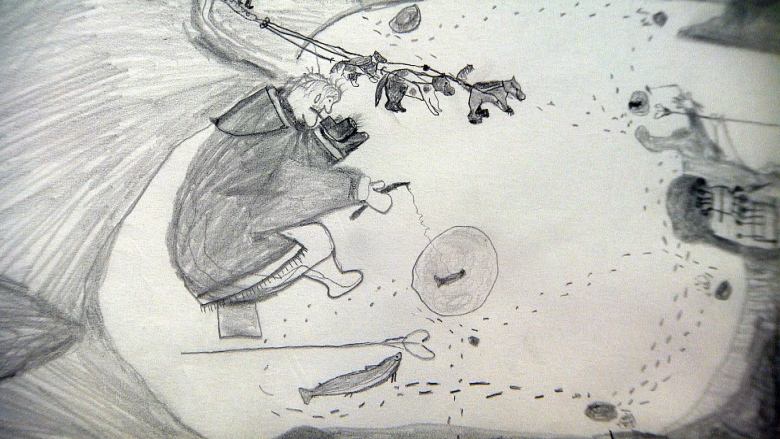 In 1964, a collection of about 1,860 sheets of drawings — some double-sided — was created by 159 Inuit men, women and youth in three North Baffin communities and Igloolik.

On Saturday, many of those images will return to public view in Iqaluit after remaining unseen for decades.

“Many people had not seen these drawings at all, and certainly for people that did make drawings, they hadn’t seen them for 50 years,” said Norman Vorano, an art history professor at Queen’s University and the curator of the touring exhibit called Picturing Arctic Modernity: North Baffin Drawings from 1964.

The exhibit will be on display at the Nunatta Sunakkutaangit Museum until Oct. 8.

The 1960s were a time of social, economic and spiritual upheaval and the images offer insight into how Inuit artists in Pond Inlet, Clyde River, Arctic Bay and Igloolik saw the world around them, and provide a record of their experience.

“There’s a great interest in the North to see the drawings and, very importantly, to see the traditional knowledge that’s embedded in these drawings, which is really fascinating,” said Vorano.

The images were originally commissioned by Terrence Ryan, who travelled to three of the communities by plane and dogsled, while having drawings mailed in from Igloolik after sending paper and pencils to the community.

At the time, Ryan was the arts advisor and general manager of the Cape Dorset art studio. The project was funded by the Canadian Council for the Arts, which covered travel costs. Ryan paid the artists for their work out of his own funds when he collected the completed images.

According to exhibit documentation, the artists — or rather their communities — were selected because they lacked formal art programs, meaning “people would express themselves more directly, unhindered by the perception of having to make drawings that were acceptable to southern tastes.”

Most of the drawings include Inuktitut syllabics, and are signed by their creators.

“One of the extraordinary dimensions about this collection is that it is really about Inuit artists — who are Inuit elders, and not just elders, but young men and women too — making pictures and writing stories for themselves and each other,” Vorano said.

“It really wasn’t for a outside market.”

It is likely that fewer than 100 of the drawings, most done on 50.5 by 65 centimetre paper, had ever been formally displayed before the exhibit.

It opens Saturday in Iqaluit at the Nunatta Sunakkutaangit Museum at 2 p.m.

Many of the images and the stories behind them can be found on the Agnes Etherington Art Centre’s website in English, French and Inuktitut.